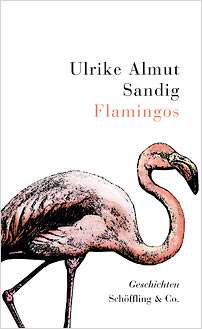 This stunning prose debut by the acclaimed young poet Ulrike Almut Sandig begins with a brief note on the title itself: flamingos stand in groups, but each individual bird is also alone. They can easily be overlooked, and yet they possess a certain weight as they stand in our midst. And then in shallow waters they can escape us entirely and fly away. A particular strength of this collection of eleven short stories is the variety of narrative voices and subject matter, which ensure that each story is new and remarkable in its own right, yet at the same time that it resonates with some of the key ideas and motifs of the others in the collection.

The flamingos of the title appear directly in two of the stories, one of which is also called ‘Flamingos’. A young boy is being guided by his elder brother, Gunnar, through the routine of carrying the cross in the local funeral cortèges, a regular task which has earned Gunnar some handy pocket money that he has been putting towards driving lessons. We discover, however, that the procession at which the young boy first carries the cross is in fact his brother’s funeral; Gunnar was killed when he misjudged the blindspot that would be created by his family’s new camper van – bought so that the family could travel to Spain to see wild flamingos.

In the very first story of the collection, ‘Over me’, a teasing authorial voice refuses to attach itself to any stable autobiographical character, describing the first person character of the narrative instead as a non-presence, something or someone that can be as easily overlooked as the flamingos in the zoo. Narrating the uneventful life of an old woman backwards, it merges the point before birth with the point before narrative and opens our eyes to the whimsical nature of character, story – and life itself.

The attempt to convey different conditions and experiences, whether medical, emotional or physical, that can occur as part of many people’s lives, runs through nearly all the stories. The lucidity and poetry of Sandig’s prose make each of these stories a joy to read, while giving the collection as a whole a dynamism and energy that keeps bringing the reader back for more. This admired young poet has proven herself to be a master of the short story, too.

Ulrike Almut Sandig was born in 1979, grew up in Riesa and now lives in Leipzig. She studied Religious Studies and Indian Studies before enrolling at the Institute for German Literature in Leipzig. Sandig has already achieved success as a poet, receiving many prizes and most recently the Leonce and Lena Award. Flamingos is her first prose work.

Schöffling & Co. has a simple credo: the focus is on the authors. It has gained the reputation of being a ‘publishing house that plays a significant role in the shaping of Germany’s literary future’ (SPIEGEL online). Founded in November 1993, Schöffling & Co. has since emerged as one of Germany’s most innovative independent literary publishing houses with a tightly-woven international network. An atmosphere of mutual confidence and esteem and an unceasing commitment to its authors and their works provide the basis for a fruitful literary relationship. New German voices are recognised and published alongside established and famous names, while authors in translation include Sadie Jones, Olga Tokarczuk, Jennifer Egan, and Miljenko Jergovic.