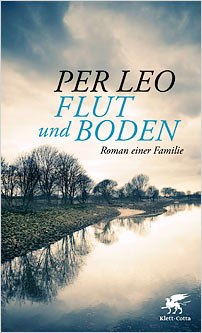 by Per Leo
Klett-Cotta
February 2014 / 350pp
Biography and Memoir

An obsession with his grandfather’s Nazi past leads historian Per Leo to write this highly-acclaimed multi-layered debut: as much a personal family history as an investigation into ideology and the chemical make-up of the individual.

The focal point of Flood and Soil is the juxtaposition of the lives of SS officer Friedrich Leo and his chemist brother Martin – Leo’s grandfather and great uncle. The motto ‘Blut und Boden’ (‘Blood and soil’), to which the title refers, relates to the Nazi ideology of racial purity tied up with a closeness to the land. Leo’s grandfather, a failed agriculturist, held high rank in the Race and Settlements Department, overseeing the acceptance of citizens to the Third Reich territories based on racial background and bodily strength. He takes his idealism to the ultimate extreme when he becomes involved in – or perhaps even instigates – his own brother Martin’s imprisonment and sterilisation due to his poor health.

Leo uses his great uncle’s memoir as the basis for this book, which describes Martin’s life in the GDR, his time in prison, and his eventual release (possibly on his brother’s orders). The author magnificently interprets the Nazi regime not as a singular unpredictable event, but as something that grew and flourished over time; within individuals, families, and society.

Per Leo was born in 1972 in Erlangen, studied history, philosophy, and Russian literature, and holds a PhD in philosophy. His dissertation was awarded the Humboldt Prize for research in the field of Jewish Studies and Anti-Semitism. He lives in Berlin and works as a writer and humidor builder.

Klett-Cotta is one of Germany’s oldest publishing houses. Cotta, the essential publisher of German classical literature, which was founded in 1659, stands for major literature and philosophy in the tradition of Johann Friedrich von Cotta, publisher of Goethe, Schiller, and others. The second line of tradition traces back to the publishing house that was developed by Ernst Klett between 1936 and 1976.