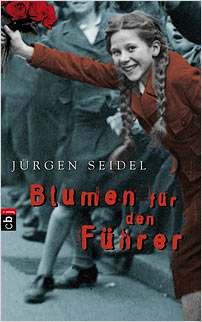 This fascinating historical novel for teenagers offers a wellresearched and entirely original snapshot of the dawn of the Nazi regime as it seduces, deceives and spreads its influence throughout German society.

Overnight, life for 15-year-old Reni changes dramatically. Brought up an orphan, and popular not only for her stunning beauty but also for her stories about Albert Schweizer, the ‘jungle doctor’ of West Africa whom she idolises, Reni’s true hero is Hitler himself. She cannot believe her luck when, in the summer of 1936, she is chosen to present him with a bouquet of flowers during the opening ceremony of the Berlin Olympics. But Reni’s encounter with the Führer is disappointing and, confronted with the expectations of others, she is compelled to invent positive details – even describing how offices are being set-up by Hitler’s ‘humanitarian’ government to aid Schweizer’s efforts in Africa.

Count Haardt, the owner of her orphanage, is keen to move into the inner circles of the up-and-coming Nazi regime in Berlin, and he uses Reni to his advantage. Now revealed as his daughter, she moves into the big house and becomes a countess. She meets Jockel, the son of one of the estate labourers, who shares a similar outlook to Reni and dreams of being a pilot. However, a fight with another farm boy which ends in tragedy means Jockel has to run away. Jockel and Reni meet again secretly, but her father finds out and the two are separated for good.

Finally, Reni travels to Berlin to attend one of its most influential salons for the first time. Reni tries on her gown for the evening and is transformed from a child who dreamed of working as a doctor in Africa into a stunning young woman, the object of desire in an elitist society. Julius Schaub, Hitler’s closest adjutant, suddenly breaks in upon the scene and Reni glimpses the truth behind the charade. Rumours circulate that she is being set-up as a fiancée for Schaub. Then hysteria sets in when Hitler is announced, and Reni imagines he will recognise her again as the girl with the bouquet …

Providing a fascinating account of the time, the particular appeal of this new book is its persuasive description of how and why the young were deceived by the Nazi smokescreen.

Jürgen Seidel was born in Berlin in 1948. After completing an apprenticeship, he spent three years living in Australia, South- East Asia and Canada. On returning to Germany, he took his A Levels, studied German and English Language and Literature and completed a PhD. Jürgen Seidel has published short stories and radio plays and has contributed to radio and literary journals, as well as writing numerous prize-winning novels for young adults. He is regarded as one of the most versatile, interesting and literary of the German authors writing for children and teenagers today.

cbj Verlag was founded in 2004, although the Bertelsmann/Random House group of which it is part has been publishing children’s literature since 1835. cbj publishes high-quality books for children aged 4 and older. Their range includes picture books, stories for reading aloud and novels for children, as well as a non-fiction science series and several fantasy novels. Authors include Julian Press and Peter Freund, and cbj published the award-winning novel Die Bücherdiebin (2009) by Markus Zusak.