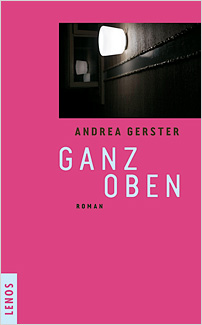 Flying High is an absorbing and accessible psychological study in self-deception and an exploration of the power of the imagination to construct its own reality.

Olivier Kamm – a highly successful forensic pathologist whose career is going from strength to strength – is rehearsing his defence before an imaginary court. He presumes he is confined in some kind of cell. His head is shaved bald. He doesn’t know where he is, why he is there, or what he is accused of. But Kamm assumes he is awaiting trial for some unspecified offence, like that other more celebrated K. of Kafka’s The Trial. We gradually learn about his life and the events that have led to this point in a multistranded narrative interspersed with Kamm’s own musings on his situation and state of mind. We are also treated to the speeches that Kamm imagines himself addressing to the court in his defence when his case comes to trial.

Gerster masterfully interweaves the various plot strands of Flying High, before finally bringing them together in a satisfying denouement. Kamm undertakes harrowing work on a police investigation into online child pornography and then goes on holiday to try and recover. His affair with a married woman during this holiday is contrasted with a previous relationship with a girl called Maila, a free spirit he met in a bar. The stories of the two women intersect at one point, when they both meet by accident at Kamm’s apartment. While on holiday with Kamm in the Dominican Republic, Maila ends up dead, her body washed ashore in the resort where they are staying. The verdict is suicide but it later emerges that the two of them had had a serious quarrel before Maila’s death. There follows a trip to Thailand to visit his ailing father, a motorcycle accident, a kidnapping and an attempted fraud. When it is revealed that mysterious marks have been found on Maila’s neck Kamm hopes to be able to use his pathological expertise to explain them away in court. Kamm’s anxiety about the impression his story is making on the imaginary court contributes to the novel’s tense and expectant atmosphere.

The truth remains tantalisingly elusive in Gerster’s suspenseful thriller, but as fans of crime fiction know, much of the reading pleasure lies in the detective work along the way.

Andrea Gerster was born in 1959 and works as a freelance journalist and author in Eastern Switzerland. She has published three novels, three collections of short stories and stories in literary magazines and anthologies which have won numerous prizes.

Lenos Verlag was founded in 1970 and is one of the most well-established publishing houses in Switzerland. Their programme has been shaped by Swiss literature, Arab literature and contemporary non-fiction.