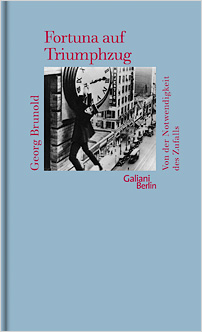 Fortuna Forever is a compelling account of the importance of luck in any human life. It argues that random events influence our lives much more powerfully than the rational pursuit of targets and goals.

Brunold pleads for the acknowledgment of Fortuna’s influence, the only goddess of the Roman pantheon still deemed powerful. While we try to be sensible and rational, we still secretly rely on our ‘good luck’. This reflects the natural human tendency to believe in invisible or spiritual powers in order to make sense of life’s capriciousness. Yet we attempt to base our day-to-day lives and decisions on rational thoughts alone, and we strive for control while handing them over to fate at the same time. Most of us want to achieve a certain level of ‘happiness’ in our lives, or at least a balance between good and bad luck. We even develop criteria in order to make the one and only ‘right decision’ in every life situation; but how do we know whether those decisions have turned out to be the right ones after all?

In a grand sweep through European history and philosophy, Brunold tracks the concept of luck, which we refuse to accept but seem to trust time and again. We trust chance when playing the stock market or gambling; when examining and comparing thousands of DNA profiles in order to find the perpetrator of a crime; when our GP is deciding on a diagnosis; when we commit fraud; or when we attempt to forecast the weather. As it is such a strong human tendency, Brunold suggests that we should rely on luck more openly, accepting that no decision we make can ever really be a bad one, and that even minute events have a highly unpredictable outcome.

Brunold’s writing style is erudite yet readable, and often humorous. He describes numerous examples of how dependent we are on luck but also how often its opposite, bad luck, turns out to be beneficial. He deals with the religious take on luck, with Macchiavelli’s political theory, with probability theory, modern-day determinism, chaos theory, mathematics, free will, artistic innovations, creativity and statistics (which he calls an admirable human attempt to ‘tame’ luck).

This fascinating new book stands out for its originality and intellectual rigour.

Georg Brunold was born in Arosa, Switzerland in 1953 and now lives in Nairobi. He was deputy editor-in-chief of a cultural magazine and correspondent for the NZZ. He has published several books in the non-fiction imprint edited by Hans Magnus Enzenberger, Die andere Bibliothek.