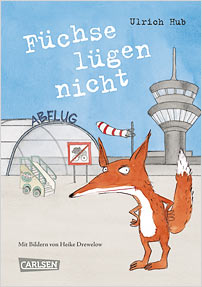 When an unlikely bunch of animals gather in the animal lounge at a large airport, anything could happen! Ulrich Hub’s marvellous story of clashing animal personalities introduces young readers to a rich cast of characters whose behaviour presents a humorous take on human stereotypes.

The group includes a hard-baked con-artist fox, a garrulous airheaded goose, a pair of self-consciously intellectual sheep, an aging film-star tiger, a hyperactive monkey, and a self-important (and sleepy) panda bear. And of course, the security dog, a decorated hero with self-esteem problems and a secret to hide. Cooped up together in the animal lounge, it’s no wonder that pandemonium breaks loose …

The fox is on the run and has a cunning plan to get hold of the other animals’ passports – especially the panda’s passport with its valuable protected species stamp. To do this, he has to gain the animals’ trust, and somehow win over the security dog. But the fox does not reckon with the relationships he develops with the animals in their enforced proximity. He exploits their weaknesses, only to find that he ends up feeling rather sorry for them, and that lying doesn’t make him feel that good. Before the group of animals can exit the story as friends, they are led astray by the fox and wreak havoc in the duty-free shop, subsequently holding a wild party in the lounge. Finally, the fox and the dog join forces to rescue the group from a near catastrophe.

This is an ideal book for children who are gaining confidence as independent readers, while also working well as a read-aloud bedtime story. As one would expect from an author who is an experienced stage-writer, the characters in this book have strong voices, reflecting their individual personalities and preoccupations. The tiger is worried about growing old and has suitcases full of make-up and fur dye; the sheep turn out to be clones, laboratory-bred in England; the monkey has lost his family in the jungle and has signed up for animal testing to give his life a purpose; the sniffer dog has been living in fear after losing his sense of smell and thus his employability. Foxes Don’t Lie is a cheerful romp of a tale with a gentle moral message, while also introducing more complex ideas in a context that is recognisable and yet reassuringly fictional.

Ulrich Hub was born in Tübingen and trained to be a performing artist in Hamburg. He works as a director at different theatres, and writes plays and screen plays. Ulrich Hub is one of the few authors to be famous for his work in both children’s and adult theatre. He lives in Berlin.

Previous works include:
Meet at the Ark at Eight (2012)