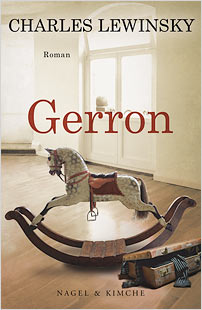 The life of Jewish entertainer Kurt Gerron is a truly extraordinary and unique story, and Lewinsky does it ample justice in this epic novel. Telling the story from the perspective of Gerron, star of stage and screen in the pre-war years, Lewinsky keeps a balance between the gregarious cynicism of Gerron’s legendary stage persona and an unflinching record of the horrific events unfolding around him. In this way, the author succeeds in viewing the Holocaust through a new and startling lens.

Imprisoned in Theresienstadt, Gerron is asked to direct a propaganda film about this ‘paradise ghetto’. He isn’t accustomed to moral reflection and, to avoid the terrible choice he’s been forced to make, he escapes into his memories. With gusto the entertainer recalls his youth, his rise and fall in show business, and the long, cruel sequence of events that have led to his imprisonment. The horrific world of the concentration camp seeks to reduce him to nothing; he needs to remember that he was once someone, starring opposite Marlene Dietrich in The Blue Angel and premiering ‘Mack the Knife’ in The Threepenny Opera. Eventually, he agrees to make the film, if only to save his wife and the participants in the film from deportation.

Directing, he feels himself once again. But the entire process is full of macabre jokes, which Gerron notes with bitter irony; only, of course, there is nothing funny at all about Theresienstadt. The film is never edited properly, and one day Gerron finds that he has been assigned to a transport: the comedy of his life will reach a horrific end. Gerron’s voice is cynical, wry and warm. Lewinsky has chosen to dispense with the modernist aesthetics often thought appropriate for Holocaust literature in German, instead telling the story in a straightforwardly realist fashion through Gerron’s acerbic voice, which is knowing while also being ignorant of the scale of the genocide around him. As he is tugged back to the reality of his life in the concentration camp again and again, he draws cynical parallels between the scenes of his youth – his snobbish mother, in the trenches, on the stage, performing cabaret in a transit camp – and the bitter absurdities of his current existence. His anecdotes are lively, scurrilous and rambling, and his remarks on Theresienstadt and Nazism perceptive and biting without ever deteriorating into pontification.

A gripping and moving masterpiece.

Charles Lewinsky was born in 1946 and lives in France and Zurich. He has previously worked as a playwright, director and editor. Gerron was shortlisted for the Swiss Book Prize 2011.