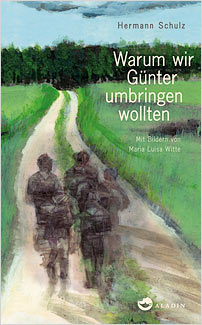 This haunting, sumptuously illustrated moral fable is set in post-war Germany and demonstrates the extraordinary brutality of which children are capable.

The main story, narrated by eleven-year-old Freddy, is set in 1947 on his uncle’s farm in northern Germany. There are also scenes from two years earlier when refugees arrived to settle in the region as Germany’s infrastructure crumbled at the end of the war. Freddy is living with his uncle, aunt and older cousins because of trouble with his own parents. He enjoys the farming life and the animals and is pleased to find boys of his own age among the refugees.

Günter is the outsider among the children. He suffered brain damage at birth and has a speech impediment and a perpetually snotty nose. Yet there is more to Günter than meets the eye: he loves horses, and when he is alone with Freddy and the farm animals his speech impediment all but disappears. Freddy’s friends pick on him, and Leonhard, the ringleader, eggs them on one day to indulge in a prolonged bullying session. They imprison him under a dirty truck and bombard it with stones, almost deafening the boy inside, who comes out filthy. Slightly sobered, Leonhard decides that although Günter doesn’t seem to have told any adults about his ordeal they had better kill him before he does. They hatch a secret plan to drown him in a ditch.

Freddy, very uneasy, tries to resist the idea, intending to frighten Leonhard into giving up the scheme by threatening him with his uncle’s rifle. Events reach their dramatic climax with the appearance of a ‘late returner’ from the war – a shabby man with a nervous tic who is still wearing his old army uniform. He unnerves the boys by offering Leonhard his army pistol to finish Günter off. He seems somehow familiar to Freddy, who at last recognises him as his grownup cousin, Willi, who had promised Günter’s father to keep an eye on the boy. As Willi expected, Leonhard is thoroughly shaken, and drops the pistol in the ditch. Willi sends the gang off to Günter’s mother to make peace and offer apologies all round.

Getting Rid of Günter is an unusual story which does an excellent job of imagining the horrific consequences when childhood bullying is combined with lingering Nazi mindsets. The remarkable watercolour illustrations add another rich dimension to what is already a striking tale.

Hermann Schulz was born in 1938 in East Africa. He grew up in Lower Saxony, where this story is set, in the Wendland. After his apprenticeship in bookselling, he worked in the Ruhr area’s mines and travelled the world. For many years he was the publisher of Peter Hammer Publishing and wrote many awardwinning children’s and young adult books.

Aladin Verlag publishes an exciting and diverse programme for children aged between three and twelve years. With about forty new releases every year, Aladin publishes children’s books and picture books for parents and children who appreciate the quality of the printed book and the value of a story that is created with love and told in an exciting way. Thanks to years of experience and the good fortune of its publisher Klaus Humann, Aladin represents several of the most renowned German and international illustrators and children’s book authors in its programme. The publishing house also works towards promoting young and promising talents.