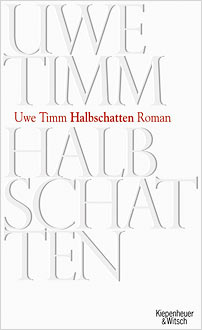 Berlin’s Invaliden Cemetery, the starting point and recurring focus of Uwe Timm’s ambitious new novel, was, from the time of its founder, Frederick the Great, until 1950, when it fell into disuse and decay, the last resting place of Germany’s military dead. Officers killed in the Napoleonic Wars, First World War air aces, leading Nazis, Berliners killed in air raids – the cast list is huge. But among all these dead lies only one woman. She is Marga von Etzdorf, a famous solo flier of the interwar years and the German counterpart of Britain’s Amy Johnson, whose life ended tragically when she landed in Syria on her third flight to Australia and shot herself there, for reasons still unknown. It is on her account that the narrator (Timm himself perhaps?) has asked for a tour of the cemetery, in the late afternoon of a cold, dank All Souls Day, with a specially recommended elderly guide referred to simply as ‘The Grey Man’.

But who is this guide? How does he come to know so much, and on such arcane subjects? Why is he wearing such eerily unsuitable shoes? And how, most of all, can he make the dead speak from their graves? They answer when called upon, some briefly, some at more length. Some of their voices are grotesquely muffled, because they are still so full of earth. Or again, there may be the sound of a violin. That is Reinhard Heydrich playing Mozart. So we have here three elements: the makings of an underground novel, an overrview of two hundred years of German and Prussian military history, and Marga’s own story, which predominates. Her love life, as depicted in this book, is imaginary, and sad. But she herself is enchanting. We see her in contrasting modes: dressed for a party, looking elegant, even sexy, if always a shade withdrawn, and in the cockpit of her plane, wearing her oil-smeared flying suit, totally hands on and doing all her own maintenance work. Her total expertise as a pilot, the beautiful voice in which she sang as she took off – everything about her is head-turning.

Taking his cue from his principal character Uwe Timm, in this bid for the German Book Prize, has performed an unrivalled series of verbal aerobatics. Readers will have learned before they open this issue whether his aviatrix has flown him to the top.

Uwe Timm was born in 1940 in Hamburg. After an apprenticeship in the fur trade, he studied German literature and philosophy in Munich and Paris. He writes for both adults and children, and has received prizes for his work in both fields. His books have been translated into fourteen languages.

Rights to this book already sold to:
Mondadori (Italy)