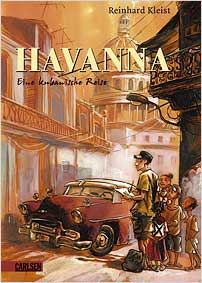 Comic and street artist Reinhard Kleist spent four weeks in Cuba in 2008, nearly always with sketchbook in hand. The resultant work is categorised as a graphic novel, but really it is more of a graphic travel notebook, enlivened as it is not only with comic-strip-style drawings of Havana itself but of the picturesque old town of Trinidad and the beautiful rural valley of Vinales. The middle pages of this humorous and original offering are a four-page-wide fold-out picture of Malecon, Havana’s seafront promenade, with a wash of sunset colours lighting up the city, its chaotic roads and its people, walking out, eyeing each other up, fishing, or just sitting on the beach.

There are plenty of interesting details and anecdotes in the often handwritten script to keep the reader turning the page, but the only connecting thread running through some of them is the author’s preoccupation with having an internet connection with the outside world, which farcically culminates in his procuring a black-market connection with Google. But this crashes too, and the best the dubious friend who claimed he could provide it can do is to offer his pals two pounds of coffee for the price of one. Just a single illustration of the extent to which Cuba’s citizens are still cut off from international information and intellectual exchange – as well, of course, as certain foodstuffs. In another section Kleist ends up at a Communist Youth demonstration outside the US embassy and captures this strange Cold War place in his pictures, with a forest of Cuban flags almost blocking the embassy building from view. Later he sees a ceremony of the Afro-Cuban santeria religion.

In short this highly-thumbable book is a wonderfully subtle and atmospheric combination of drawings and text that touches lightly on important questions without ever letting them weigh the reader down on what is essentially a great adventure.

Reinhard Kleist was born in 1970. After graduating in graphic arts, he moved to Berlin where he now shares a studio with other comic artists. His comic books have won several awards, including the most prestigious one for German comic publications, the Max und Moritz award which he received for Cash.