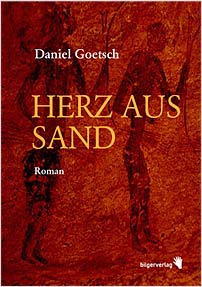 Frank is a UN observer, his current posting near a refugee camp presumably in the part of Africa that used to be known as the French Sahara. The mission is to draw up a list of voters from among the refugees to take part in a referendum. However, those in power use a torrent of objections to ensure that it is a never-ending task. Meantime Frank and his colleagues sit around, drink date schnapps, and he in particular with his ‘heart of sand’ turns a blind eye to many of the unpleasant things happening around him. His reports back to Geneva have become routine, kept out of the camp proper as he is. It is only when finally, on a clandestine visit, he discovers the extent of the human misery there, and understands that his doctor friend is undoubtedly doing more good than he is, that something shifts, and he begins to grab the situation by the horns, deciding it is never enough simply to feel unease, and that action has to underpin his concerns.

He has plenty to contend with, not least the legacy of one of the UN team who has recently died, the architect Duncker whose idealistic ambition of turning the camp into a model village had become an obsession leaning to right-wing ideas and eschewing human needs. He reminds Frank of his girlfriend’s employer, the even more right-wing politician who had been the cause of some of the tension between him and Alma, one of the reasons he had been pleased to escape Switzerland for a time and take up the post in Africa. Then there is the South American Mendes, a cynical soul mate, who has started classes to help refugees escape to Europe and remain undiscovered there. By contrast the drug-dealing South African Basson wants to make sure the refugees stay put. Which side will Frank come down on? The development of his character is one of the book’s great strengths.

Dealing with themes very much of our time and a world away from any mutterings of ‘parochial literature’, this is a brave, wise, thoughtful novel whose particular strengths lie in characterisation in general, backed by Goetsch’s excellent style. Here is a writer capable of memorable phrases who charts new territory with each new book. This, his latest, is hard to put down.

Daniel Goetsch was born in Zurich in 1968. His university days were spent in Zurich and Toulouse, and now he lives in Berlin. His short stories have been published in anthologies and he has written widely for the theatre and radio. This is his fourth novel. He received the prize of the Kanton of Zurich for his first novel Aspartam and the Autorenpreis des Heidelberger Stückemarkts in 2003 for his work as a playwright. In 2008 he was awarded the Halma grant.

Bilgerverlag was founded in 2001 by Ricco Bilger and specialises in contemporary Swiss literature. Authors include Katharina Faber, Urs Augstburger, Kaspar Schnetzler, Urs Mannhart, and Christoph Simon. Ricco Bilger opened his Zurich bookshop in 1983, and ten years later, another bookshop in mountain spa town of Leukerbad, where he went on to found the successful Leukerbad Literature Festival. In 2007 Bilger was the driving force behind the formation of SWIPS, the forum for Swiss Independent Publishers.