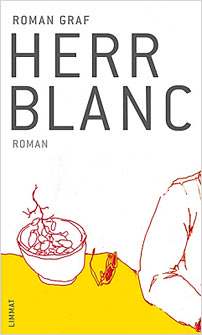 Set in contemporary Switzerland, this prize-winning debut novel takes the reader on an uplifting journey through the life of Anton Blanc and the three women in his life, as he struggles to come to terms with that sense of opportunities missed and avenues left unexplored.

Studying at Cambridge University, Blanc had met and fallen in love with Heike, a German fellow student, but they separated because Blanc was determined to return to Switzerland where his protective mother and good job prospects awaited him. He leads a dull and lonely existence; however, a series of crises including the death of his mother lead him to find a wife, Vreni, via the lonely hearts column in his local newspaper. Vreni, a widow who has never got over the premature death of his first husband, takes over Anton’s mother’s role, but Blanc’s thoughts return to Heike.

Shortly before Blanc’s retirement, a distant relative of Heike’s in Poland contacts him with the news of Heike’s death, and invites him to collect a gift which Heike has left for him in her will. The gift from Heike turns out to be a wedding ring, and in a dramatically moving scene, the weeping Blanc drops to his knees at Heike’s graveside and, desperate with grief and regret, tries to push his ringed finger into the earth to be near her. Only in old age does he finally find himself able to act and to assert his will by taking a decision which will benefit the family of Heike’s distant relative.

Written in elegant yet simple prose, Herr Blanc is a moving psychological portrait of an individual in the later stages of a life defined by missed opportunities and unfulfilled longing. The eponymous anti-hero – as his name suggests – is the antithesis of a ‘colourful’ or glamorous character. His thoughts and behaviour are characterised by a small-minded conservatism, and a fear of moving outside his comfort zone. This insider-view of the Swiss mentality presents life in this ‘first-first world country’ as a double-edged sword, so comfortable and secure that even a visit over the border into Germany can only bring disappointment. Yet the beauty of this novel is that for all his human weaknesses, Herr Blanc is a sympathetic character whose existential dilemmas are ones with which it is easy to identify. And despite the melancholic tone of the narrative, the novel brims with a quiet humour and ends on a life-affirming note, conveying the message that it’s never too late to take positive action.

Roman Graf was born in 1978 in Winterthur, Switzerland. He is studying for a Masters degree in German Literature in Leipzig, having completed a first degree in Zurich. In 2007 he was Artist in Residence in Krakow and Breslau, Poland, and Graf now divides his time between Winterthur and Leipzig. He was awarded the Studer/Ganz-Preis in 2008, the Mara-Cassens Prize in 2009, and the Bremen Prize for the most promising young writer in 2010. Herr Blanc is his first novel.

Limmat Verlag published its first book on 19th March 1975 and Schweizerische Arbeiterbewegung (‘The Swiss Workers’ Movement’) is still a standard work today. It pursues historical and political themes in its non-fiction list, with particular emphasis on women’s studies, and has a fiction list of predominantly Swiss contemporary voices. The publisher of critically acclaimed editions of the novels of Swiss crime writer Friedrich Glauser, it also publishes dual-language books which reflect the richness and variety of language of Switzerland’s past and present.