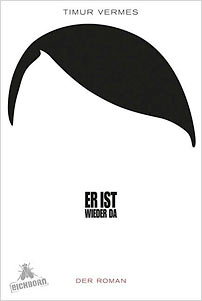 What would happen to Hitler if he were alive today? What would he make of contemporary multicultural society? How would people react to him? Vermes dares to imagine the answers to these questions in his humorous and intelligent satire, which envisions Hitler at large in twenty-first century Berlin.

It is the spring of 2011. Hitler wakes up on an empty plot of land in Berlin. He has a bit of a headache. He can’t remember anything after being with Eva Braun in the bunker, so is somewhat confused to find Berlin suddenly intact and not overrun with Russian soldiers. He wanders the streets until a newsagent takes pity on him and lets him sleep in his kiosk. People obviously recognise Hitler but they assume that he is a comedian playing a role. His unintentionally hilarious monologues and the way he never slips out of character cause a great deal of amusement.

Hitler is given a guest slot on the show of a Turkish-born comedy star, Ali Wizgür, and instantly ups the ratings with his bitingly ironic ethnic humour. He turns into a YouTube phenomenon, loved by today’s youth. An influential tabloid newspaper proclaims its suspicion of Hitler, until he manages to trick the journalists into giving him the paper’s full, ingratiating support. From then on, the only way is up. Hitler takes to the streets and interviews innocent passers-by on topical subjects, whipping them into a fury over dog muck on the pavements or speeding drivers. All of which makes for great TV. Hitler makes a televised visit to the headquarters of Germany’s far-right political party, the NPD. He is horrified by the lack of conviction among the neo-Nazis he encounters there and showers the party leader with insults. This interview wins Hitler a prestigious journalism prize – for his satirical exposure of prejudice! The neo-Nazis are furious and beat Hitler up. He winds up in hospital where he receives messages of support and condolence from all sides. He is contacted by a publishing house wanting to know whether he would like to write a book. Hitler decides that, while he’s at it, he may as well start a political party of his own…

The amusing scenarios generated by imagining Hitler in today’s Berlin are given added depth by Vermes’ clever psychological observations of people’s ridiculous behaviour when confronted with a supposedly fake Adolf Hitler. He’s Back would be a bold and rewarding acquisition.

Timur Vermes was born in 1967, the son of a German mother and a Hungarian father. He studied history and politics at the University of Erlangen and then became a journalist. He has worked for several newspapers and magazines. In the past five years he has ghosted several succesful works of non-fiction. This is his debut novel.

Eichborn is the original publisher of many works translated into English, including A Woman in Berlin by Anonymous, The Old Child, The Book of Words and Visitation by Jenny Erpenbeck, The 13 ½ Lives of Captain Bluebear and Wild Journey Through the Night by Walter Moers, W.G. Sebald’s The Emigrants, The Rings of Saturn and Vertigo as well as Ice Moon and Silence by Jan Costin Wagner. It became a division of Bastei Luebbe, Germany’s largest independent publishing group, towards the end of 2011. With verve and vigour Eichborn will continue to discover and to establish new and original authors’ voices.