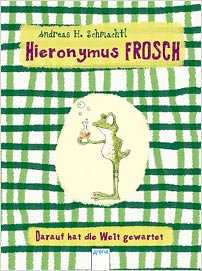 Schmachtl has created an enchanting character, whose inquisitiveness and perseverance will engage young children with the wonders of the world around them. He combines humour with beautiful descriptions of nature, plants and animals, alongside small hints about science and what it really means – all accompanied by wonderful illustrations, some watercolour, some in the same green as the main text. Frequent comic-strip sequences break up the chapters and lend themselves particularly well to the comical situations in the book.

Hieronymus the Frog is a gifted inventor, who will work on any problem until he has found a solution, no matter how long it takes him. No day goes by without Hieronymus wondering, questioning and researching, by himself and with the help of his little group of friends, all of whom are equally extraordinary. There is his neighbour Emmy the shrew and her five children, Monti the fire salamander and the mole XT21. And without fail, the breakthrough always comes with a brainwave, ‘a scientific sensation’ as Hieronymus exclaims every time.

Hieronymus longs to be accepted into the animal scientists’ club, but the powers-that-be only regard him as an amateur. By the story’s end they will be proved wrong, because Hieronymus does not shy away from any question that presents itself, and he is comfortable in any scientific field. As an engineer, he designs a semi-automatic postcard maker, an automatic pea-counting machine and a semi-automatic one-person-cooling rain machine; he digs tunnels and lays pipes for secret passageways into his neighbour’s garden; and he invents a tin-can telephone. He is a chemist, who produces woodruff extract to make an invisibility sun lotion. He is a meteorologist, who can burst clouds to create rainfall. But more than anything Hieronymus triumphs in aerodynamics as he creates an extraordinary pedal-powered flying machine. With the help of this ingenious invention, Hieronymus is able to complete a study of puffins, which finally gains him recognition by the Royal Society for Enriching Knowledge. All this against the schemes of ‘nasty Nick’, a mischievous frog who is always working hard to prove Hieronymus a failure.

The themes of science, inventiveness and inquisitiveness, alongside a host of lovable characters, inspire the imagination and make Hieronymus Frosch utterly original.

Andreas H. Schmachtl was born in 1971 and studied fine arts, German literature and English in Oldenburg. He spends a great deal of his time in England, where he finds the ideas for his books. It is no coincidence that they centre on frogs, mice and other small folks that he particularly wants to rescue and protect.