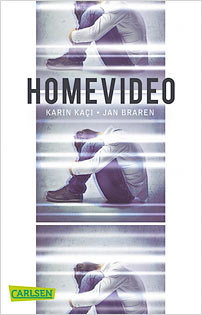 Home Video deals with popular themes of bullying and growing up. Intense and gripping throughout, with highly engaging characters, this title would transition readily into the English-language Young Adult market and would serve as an excellent introduction to Karin Kaçi’s oeuvre. Home Video is an enjoyable yet unsettling read, reminiscent of Erin Lange’s Butter and Alice Oseman’s Solitaire.

Fifteen-year-old Jakob is a keen skateboarder and filmmaker/ photographer. Faced with the challenges of dealing with a family break-up and a burgeoning romance with his girlfriend, Hannah, recording his life on film and photos brings Jakob some calm in an otherwise fraught world. He uses the camera lens to create a diary of his daily life and to record moments of particular significance. That is until an intimate film from his camera ends up in the hands of some of his classmates and is posted on the internet. Its content is soon known by the entire school and beyond. Jakob now has to deal with severe bullying, as well as a break-up. Hannah withdraws from him and although his parents and teachers attempt to intervene, Jakob is too distraught and can see only one, desperate way out.

Although from the very start of the novel it is clear what is going to happen at the end – as Jakob’s father, Claas, sits watching his son’s videos in an empty house, knowing Jakob will never return to it – it is still shocking and memorable when Jakob takes a gun he has stolen from his parents down to the river to end his own life. Kaçi’s sensitive depiction of Jakob’s reflections and feelings guarantee readers’ sympathy for her stricken protagonist. The book’s closing lines offer a haunting epilogue to the pacy, intense narrative.

While most Young Adult books that deal with bullying end with a happier resolution, Home Video delivers a stronger message about the way bullying can affect people in a dramatic and profoundly moving way.

Jan Braren was born in 1968 and studied philosophy, psychology, public law and history. After graduating he set up the label ‘5D’ which supports developing projects in art and media, usually with a connection to film. His screenplay for the TV film Homevideo won him the Grimme Prize in 2012 and many other awards.

Karin Kaçi was born in Germany in 1976. As the daughter of Armenian parents from Turkey, she has a connection to both eastern and western cultures. Since completing her studies in screen-play she has worked as a freelance author for film, television and radio dramas as well as writing works of prose.