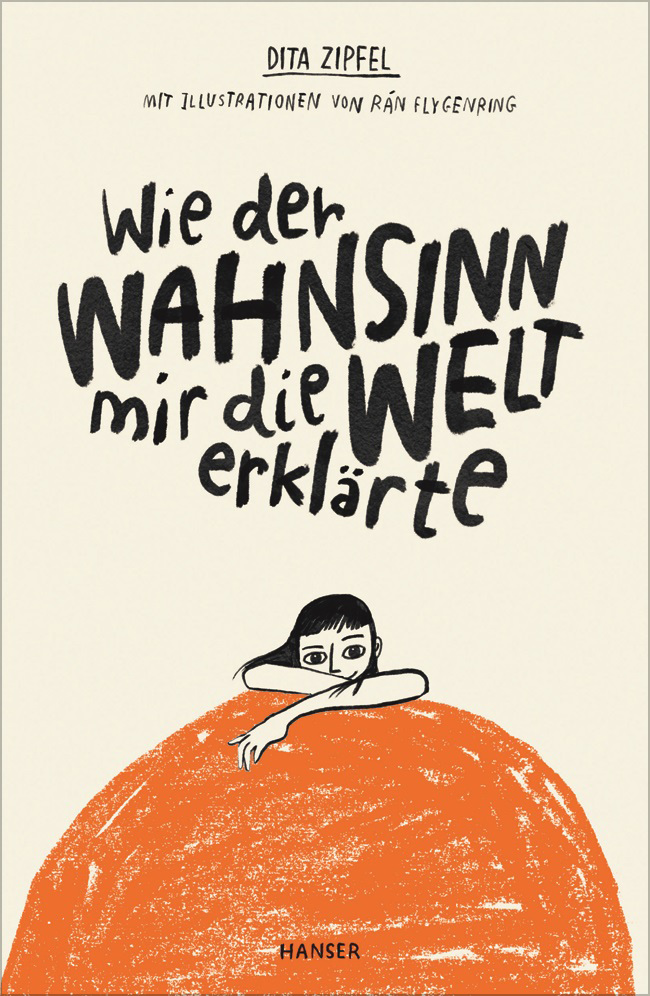 Dita Zipfel’s YA debut is a coming-of-age story exploring current and challenging themes that are hot topics for a young teen readership.

How Madness Explained the World to Me is narrated from the perspective of the nearly thirteen-year-old Lucie and offers witty and often cynical insights into her adolescent awakening, while examining the diversity of contemporary family arrangements. The book uses humorous cartoon illustrations by Rán Flygenring throughout to support the storytelling. Lucie lives with her younger brother, Jannis, and with her mother, who has had a number of what Lucie deems to be unsuitable live-in partners of both genders. She is acutely aware that she is not one of the in-crowd, has still not started her periods and doesn’t yet have breasts. Lucie wants to visit her mother’s ex-girlfriend in Berlin for various reasons, not least because of her mother’s new live-in boyfriend, Michi. She needs money to pay for her train ticket and thinks she has hit the jackpot when she finds an advert on a supermarket board for an overpaid dog walker.

Lucie soon discovers that there is no dog and that the strange and crazy man who posted the advert is actually looking for a ghost writer for his weird cookbook of recipes with magical properties. She doesn’t believe that the man really has discovered magic recipes but she uses one anyway to create a love potion for Marvin, a boy in the school year above, who the girls swoon over. It transpires that Marvin is not to be trusted: he tricks his way into Lucie’s home, copies a family photo of her younger brother dressed in a ballet outfit, adds homophobic references and posts it online for all to see. Lucie works with Leo, a friend of Marvin’s, to seek revenge and ensure that Marvin gets his comeuppance for this and other misdemeanours.

Reminiscent of the popular Tracy Beaker books by Jacqueline Wilson, How Madness Explained the World to Me profiles a protagonist from a relatively unconventional background, working through her early adolescence. Lucie’s story engages with many themes relevant to young people today, including bullying and cyber-bullying, self-image, veganism, bereavement, homophobia, gender-stereotyping and mental health. This compelling novel is a sharp and entertaining take on growing up in the twenty-first century

Dita Zipfel was born in 1981 and lives with her family in the smallest castle in southern France and in the biggest broom closet in Northern Germany. She writes plays and screenplays. Her YA debut Wie der Wahnsinn mir die Welt erklärte was awarded the Hamburg Advancement Award for Literature.