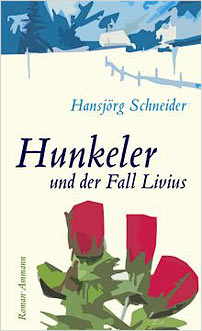 This is the sixth murder mystery by the eminent Swiss author and playwright Hansjörg Schneider featuring Detective Peter Hunkeler. As the book opens the stubborn, determined and sometimes difficult cop is on holiday in Alsace with his long-suffering girlfriend Hedwig, whose tolerance is more than usually stretched when he is summoned back home to Basel (the author’s home too) to unravel a gruesome killing in an allotment on the city’s outskirts. An old man known as Anton Flückiger has not only been butchered but also hung up on a meat hook. However, problem number one, was Flückiger his real name? Was he in fact a German soldier called Livius? He had become, on his marriage, a naturalised citizen of the remote and mountainous Emmental region. But such was his reputation as a chaser of other villagers’ wives that none of their cuckolded husbands would have been sorry to see him dead.

Hunkeler leaves Basel to visit the village of Rüesbach where the victim and his wife had settled, and there he makes three discoveries. One, that the murdered man was indeed a German soldier and that his real name was Russius. Secondly, in a small grave on his property, he had buried an SS uniform and other reminders of his past. And thirdly, rooting about in the wartime archives, the detective comes across a case in which a group of French wartime deserters had been executed and suspended from meat hooks by German soldiers. Clue or coincidence? The reader must wait and see.

This is a complex, atmospheric book. The harshness of life in the Emmental region is vividly described (Hunkeler determines to buy more Emmentaler cheese to support those hard-working peasants!). Also explored is the little-known dilemma faced by different minorities in Switzerland from time to time. For instance, in this case, the allotment community where the body was discovered is on French ground but the victim was Swiss. Therefore, which police force should act?

Any of the books in the Hunkeler series can be read independently and all should be candidates for translation. Given the vogue for thrillers set in foreign parts, not to mention Switzerland’s perennial attractions, surely now is the time to start.

Hansjörg Schneider was born in 1938 in the small Swiss town of Aarau near the Jura mountains. He has written a wealth of plays and novels and has been awarded the major crime novel awards and others for his work in the theatre. He lives in Basel.

Ammann Verlag was founded in 1981 by Egon Ammann and Marie-Luise Flammersfeld, and has a high reputation in the field of serious contemporary fiction and poetry both by Swiss and international writers, including Thomas Hürlimann, Eric-Emmanuel Schmitt, the Nobel prizewinner Wole Soyinka and the Syrian poet Adonis. Ammann Verlag also publishes rediscovered modern classics by writers such as Fernando Pessoa, Attila József, Ossip Mandelstam and Alejandra Pizarnik.