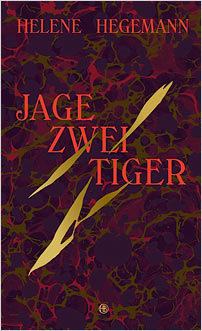 Helene Hegemann’s hotly anticipated second novel is an impressive follow-up to her sensational 2010 debut. The shocking immediacy of the prose in Hunting Two Tigers is perfectly matched to the tumultuous lives of its young characters.

When a group of children throw a rock from a motorway bridge it strikes a passing car. The car’s driver is killed and her traumatised eleven-year-old son Kai, who had been a passenger in the backseat, flees the crash scene to shelter in a nearby forest. There he encounters a travelling circus and falls in love with a teenage girl called Samantha. He doesn’t know, and won’t find out, that she was part of the group who threw the rock from the bridge. After Kai wakes up in hospital hallucinating, with his estranged father at his bedside, he has no option but to go and live with the man who is now his only parent.

Alongside Kai and Samantha’s stories, we are introduced to another troubled teenager: Celine is a spoilt child from a wealthy background with a history of self-harm, drug abuse and sexual transgression. Celine runs away from home and tries out various alternative lifestyles before her path crosses that of Kai’s bohemian father, with whom she falls obsessively in love. Celine helps Kai to find Samantha, who he has not been able to stop thinking about, and their journey to find her unexpectedly brings Celine and Kai even closer together.

The novel’s title, Hunting Two Tigers, is a condensed reference to its epigraph, which epitomises the raw outlook of the troubled protagonists: ‘The hunter who chases two rabbits misses both. If you must fail, fail spectacularly, chase two tigers.’ Hegemann’s young characters all crave – but lack – a place they can call home, and are deeply damaged souls. They inhabit a mixed-up and sometimes shocking world in which it is all too easy to lose one’s bearings.

Hunting Two Tigers is packed with minutely observed characters, sharply rendered dialogue and a host of memorable individual episodes, vividly recounted in Hegemann’s imaginative and distinctive language. Its sudden, radical plot twists which take the story in completely new directions and challenge the reader’s expectations make this novel very difficult to put down.

Helene Hegemann was born in 1992 in Freiburg and lives in Berlin. In 2008, she was hailed as one of the year’s greatest discoveries for her first film Torpedo, which won her the Max Ophüls Prize. In 2010 she made her debut as an author with the novel Axolotl Roadkill, subsequently translated into twenty languages. She works as a director for theatre and opera, and has a column in Interview magazine.