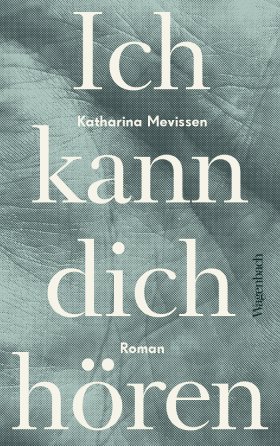 Cellist Osman Engels is struggling with life when the chance discovery of a dictaphone belonging to an unknown woman forces him to confront his issues head-on. I Can Hear You is an unusual story that explores the power of language and music.

Osman has a fraught relationship with his father – a renowned musician who was never there for him – and is striving both to prepare for a big exam and to begin a romantic relationship with his flatmate, Luise. He resents the way that music makes his feelings transparent. His aunt Elide calls to say that his father has broken his wrist and appears to be suffering from tinnitus, perhaps signalling the end of his career.

On the way to visit his father and aunt, Osman finds a dictaphone belonging to Ella, a young woman whose sister, Jo, is deaf. The recordings document Ella and Jo’s trip to Ireland and Ella’s fears for Jo if she decides not to have a hearing implant – as a sign-language user, much of the world remains closed to her. At some points, Ella’s fear is so audible that Osman cannot bear to listen. At others, the sounds of the landscape and everyday life come together in a symphony. Meanwhile, Aunt Elide decides to leave Germany and move to Paris, a dream she abandoned to look after Osman and his brother when their mother left them and their father distanced himself. She speaks in Turkish more and more, her first language returning with ease but provoking frustration in Osman, who cannot understand her.

As Osman helps to clear Elide’s house, he finds photos of his mother. His father tells him that she fell pregnant again after Osman was born but that his baby sister Esra didn’t survive. Osman tracks Ella down and returns the dictaphone. He feels close to her, having listened to it so many times, but to her he is a stranger. Ella listens to her recordings and discovers that Osman has added new tracks; he apologises for listening without permission, but tells her how it helped him to deal with his father. He has then recorded a cello composition titled ‘Esra’. Ella describes how the music gets under her skin, and then rewinds to listen again.

I Can Hear You is striking for its insightful reflections upon the connections between language and sound, embodied by Osman’s struggle to play his cello as he battles with life and Elide’s relationship with Turkish, as well as Ella and Jo’s connection through sign language and the gulf created between them by Jo’s deafness.

Katharina Mevissen was born in 1991 and grew up in Aachen. She studied cultural sciences and transnational literature at the University of Bremen, and screenwriting in Berlin. Until 2017 she was the recipient of a Heinrich-Böll scholarship. She now lives in Berlin, where she works as a freelance writer and runs the sign language literature initiative ‘handverlesen’, of which she is a co-founder.