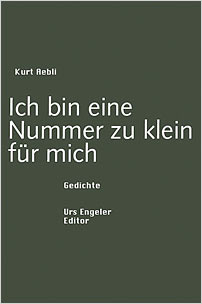 Aebli has become one of the best-known unknown writers on the literary scene in Switzerland. He has published eight slim volumes to date, including two volumes of poetry, a short story and prose miniatures. According to the Neue Zürcher Zeitung, ‘There will always be those-in-the-know to know his books and to enjoy them with others in-the-know’. It’s time for British readers to get in on the know too!

His latest collection of poems is a slim volume which specialises in short forms, records fragmentary, fleeting, impressions and thoughts, snatches of dialogue or single speech, and reflects the tightrope-walk which is human existence as an ‘I’ or a ‘he’ walks along pavements, in the suburbs, experiencing feelings for which language has yet to offer words. A voice in a head interrupts itself, for example, sees its own hands urging it to calm down, to be silent; a whole town speaks to itself. This is a poet who not only weighs every word, but who also holds each word up and out so that the reader can savour every gram. The writing is entertaining, original, often astonishing and witty, but never gratuitously so.

The original Swiss edition is beautifully produced and divides the volume into two parts. The first contains sequences with titles such as: ‘A nettle in my head’, ‘On both ends (Metamorphoses)’, ‘Picked up by the word’, ‘The music has a hole (in it)’, and ‘The wallpaper has left’. Part II consists of even shorter texts, often half a line or just a few lines long, often three or four of these to a page. Each ‘fragment’ is the whole. The language, the image, is so arresting that the reader is loathe even to move on to the next. They are, of course, juxtaposed and something like symmetry can exist across a double page. The word ‘aphorism’ may come to mind – but only to be rejected. One Scottish poet he recalls is Tom Leonard, with whom he shares perhaps a similar world-view.

This is not the type of poetry collection in which a handful of poems stand out and the rest seem mediocre. Aebli holds the reader from cover to cover. We leave you with a taste, translated by Donal McLaughlin:

The wallpaper has left I am still here

This way to the fog

A low ebb has set up its headquarters here

Everything was the colour of something that wasn’t said

Kurt Aebli was born in the small town of Rüti and now lives near Zurich. He was awarded the important Basel Poetry Prize Prize earlier this year. ‘Producing writing of a consistently high quality…Aebli deserves the respect and admiration of a large reading public.’ – Neue Zürcher Zeitung