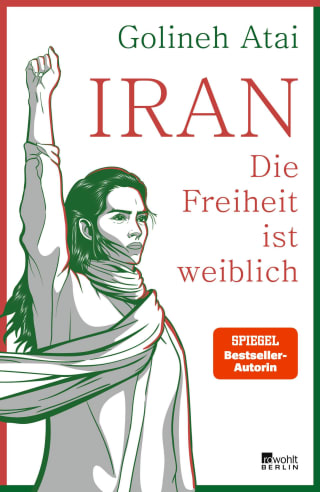 Although Golineh Atai, an award-winning German-Iranian journalist and best-selling author, was five years old when she and her parents left Iran, the country has always been close to her heart and she has had a constant interest in its development and progress. Her latest book presents an electrifying portrait of Iranian society since the Islamic revolution, with insights and observations that no outsider would be able to access.

Across seven chapters, each focusing on the perspective of a different woman and a different element of Iranian politics, Atai chronicles over forty years of control of the country by Islamic religious leaders, and the stifling of all democratic impulses. She takes the reader on a thematic journey through the country’s socio-political landscape, alternating between and intertwining pure historical context and hugely personal accounts.

Her stories include an imam’s daughter who had to fight to get an education and became a renowned international activist; a young white-collar worker in the government sector who took off her headscarf in the middle of Tehran and inspired countless other Iranian women; the widow of a martyr fighting for her husband’s legacy; tales of imprisonment and escape, of the persecution of female social critics in the Sunni provinces; of the daily struggle for dignity; of raising one’s voice in public or of simply letting one’s hair blow free. Her subjects experience fury and grief, feel as if the world has abandoned them. They all know that only when women are free can society as a whole be free, and they are all holding on to the hope that things will change.

Written in highly accessible and personal prose, this is an important book that looks well beyond a German perspective to take a global view, offering a fascinating insight into the Iranian regime and the rocky political situation of past decades. Its chapter by chapter focus on individuals who have experienced the realities of the Iranian political environment provides a unique and original account of the country and how it treats its women.

This is an urgent and important book that is at once a history lesson, a sociological study and a series of compelling portraits of courage. It will appeal to readers interested in Iran and the Middle East and also in women’s rights more generally.

Golineh Atai was born in Tehran in 1974 and was five years old when she came to Germany with her family. She was the ARD’s Cairo correspondent between 2006 and 2008 before taking on a range of assignments and roles for the network’s Tagesschau and Morgenmagazin programmes. From 2013 to 2018 she was the ARD correspondent in Moscow, was then based in Cologne and reported for WDR. Since January 2022, she has headed the ZDF studio in Cairo.

She has received multiple awards for her journalism, including the Journalist of the Year Award 2014, the Peter Scholl Latour Prize and the Hanns Joachim Friedrichs Prize.