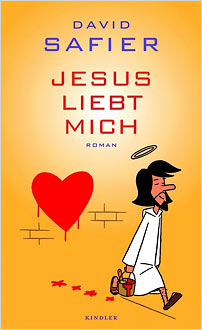 How could a novel with the nowadays embarrassing title of ‘Jesus Loves Me’ – at best a bad joke, at worst actually offensive – possibly be a success? And how could a catchline like the one on the back flap of its German edition, ‘Bridget Jones meets the Son of God’, do anything other than seal its doom? You might well be forgiven for thinking along these lines. And yet this new jeu d’esprit by David Safier, acclaimed screenwriter and author of the hit novel ‘Lousy Karma’, has proved a runaway bestseller in the author’s own country and may well prove to be one here.

Marie, the Bridget Jones character, a thirty-something overweight single, is about to marry her boring boyfriend Sven, whose biological clock is ticking louder than hers. But at the crucial moment at the altar she realises she has made a terrible mistake and jilts him in the most humiliating way possible. After this she doesn’t think her life can get any worse, so when a fit carpenter turns up to repair her father’s attic she has nothing to lose by asking him out on a date. The carpenter is of course Jesus, in his modern-day interpretation as a liberal hippie, and Marie falls for him head over heels. Even his barmy assertions that he is the Risen Lord aren’t enough to put her off.

Meanwhile, Satan is recruiting the Horsemen of the Apocalypse from amongst the citizens of Marie’s uninspiring home town. Armageddon is due to start on Tuesday next week and, as if that wasn’t enough, the Archangel Gabriel has discovered the joy of sex. With the Last Judgement looming, it doesn’t seem likely that things are going to turn out well. But of course they do.

This book is full of surprises. It is chick-lit par excellence, yet written by a man. It includes scenes of the Son of God discovering pizza, dancing salsa and drinking mojitos but still somehow gets away with it. There are even cartoon strips to break up the text and underline the message. A book like this is always going to have its enemies, given its provocative storyline, but aside from this it is a laugh, it is a hoot, it is a pleasure.

David Safier, born in 1966, is a successful screenwriter. His numerous awards include the prestigious Grimme-Award, the German Television Award and the international Emmy Award. David Safier lives and works in Bremen. His debut novel Lousy Karma sold more than 850.000 copies in Germany.

Kindler Verlag was founded in Berlin in 1945 by Helmut and Nina Kindler and belongs among the most important German postwar publishing houses. In 2004 it merged with the Rowohlt Publishing Group. As a hardcover imprint it focussed on German as well as international authors. It has also published a successful literary encyclopaedia in twenty volumes and various non-fiction titles. Its list includes literature, humour, crime stories, high-quality historical novels and non-fiction titles. Among its authors are Salman Rushdie, Tom Wolfe, Walter Jens and Sebastian Haffner.