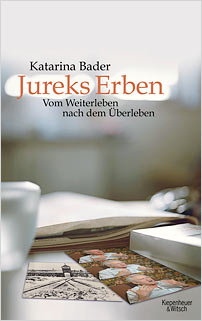 An acclaimed journalist, Bader investigates the life of a longstanding friend and Holocaust survivor who shaped not only her own life, but also profoundly inspired many others and stood as a symbol for reconciliation between Germany and Poland. Jerzy Baran, 60 years her senior, who later adopted the name Jurek Hronowski, was a Polish survivor of Auschwitz. After surviving the notorious death marches at the end of the war, he devoted himself to telling others and forging an understanding between two former enemies. In Warsaw for Jurek’s funeral, the author is shocked by the circumstances of his death, presumed to be murder, and by the fact that a man who had dedicated his life to working for youth and peace organisations in Poland and Germany could have died so alone and be mourned by so few. This prompts her to delve into his past, and wherever Bader goes she discovers that people’s relationships with Jurek had all come to an abrupt end.

During her research, the author uncovers Jurek’s active membership of the Polish secret service, but also pours light on his role in the Auschwitz trials and his estrangement from his own son, Tomek. Above all, Jurek is driven by his need to tell his story. Each of his close friendships are a means for Jurek to pass on his memories – a mammoth task which many take on, but which no one is able to complete during Jurek’s lifetime. The piles of witness accounts and documentary materials finally stand in the way of these friendships. Bader’s writing is varied and highly readable. The focus is not on the indescribable horrors of life and death in Nazi concentration camps, but more on the process of remembering. It is fascinating to see how the author respectfully removes the patina from Jurek’s memories, which have become ‘like polished stones’ during the many years of retelling. Jurek’s memories are selective but, more subtly, he has re-invented his own past, blending events and re-interpreting them to create a meaning and a sense of purpose – that all was not wasted.

This unusual mixture of biography, travelogue and memoir with a hint of detective story is a readily accessible, wellconstructed and thought-provoking testimony to one of the last survivors of Auschwitz. Readers looking for a new and forward-looking approach to this timeless topic will be won over by its sincerity and intelligence.

Katarina Bader was born in 1979 and grew up in a village at the foot of the Swabian Alb. She studied journalism, political science and Eastern European History in Munich, Krakow and Warsaw. She trained as a journalist at the German School of Journalism. Bader now lives in Munich, working as a research fellow at the Ludwig-Maximilians University and also as a freelance journalist. In 2007 she was awarded the German- Polish Journalist Prize.