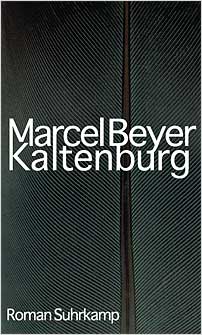 Some time in 1942 the paths of Konrad Lorenz, Joseph Beuys and Heinz Sielmann, the last-named subsequently to become famous as a director of nature films, crossed in Posen (Poznan). Perhaps learning of that encounter was the real starting point of Marcel Beyer’s novel Kaltenburg. Certainly the central figure of Kaltenburg bears some similarity to Lorenz, the ornithologist, and the younger characters, Martin Spengler and Knut Sieverding, bear some similarity to Beuys and Sielmann. Equally certainly, however, Lorenz never established a research institute in Dresden in the GDR, nor did Beuys and Sielmann spend years of their lives close to or associated with such an institute.

At all events, however, the fourth central character, Hermann Funk, for long passages the narrator, appears to have no historical counterpart. The imaginary Funk was still a child when he first met Kaltenburg, a regular visitor to his parents’ home in Posen during the war. Without understanding the reasons for it, he overhears a quarrel between his father, a botanist, and Kaltenburg – after which he doesn’t meet the latter again until some years after the war’s end. Funk’s parents are killed in the bombing of Dresden, Kaltenburg is a prisoner of war in the Soviet Union. The boy becomes obsessed by birds and so there’s an inevitability about the two meeting again when Kaltenburg sets up his institute, bargaining his growing fame as a researcher for degrees of freedom of action. But after the Wall goes up the power of his enemies grows, he becomes more isolated, and one evening, as he returns home, the jackdaws are no longer circling over the house. They have been poisoned.

Ultimately the certainties of the novel lie in these relationships with jackdaws and other birds and animals. Beyer gives wonderful descriptions of Kaltenburg’s villa as a maze with different species nesting in every room, and, in stark contrast, of the behaviour and death of birds during the Dresden firestorm. Equally memorable is the account of Stalin’s death, amidst the hysteria real and forced, which Kaltenburg records. He remembers Stalin’s eyes following him everywhere in the Soviet Union, in every camp or barracks hospital.

Building on the success of Flughunde (The Karnau Tapes) with which Beyer made his name, this novel is a full and fine achievement in every way.

Marcel Beyer was born in 1965. He studied German and English literature and language graduating with a paper on the poet Friederike Mayröcker. He went on to be editor of a literary and then a music magazine. He was writer-in-residence for a year at University College, London, and Warwick University respectively. His debut Flughunde (1995) was an international success, translated into fifteen languages. He now lives in Dresden.