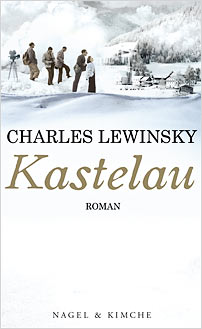 Charles Lewinsky, one of Switzerland’s finest writers, returns with a cinematic tour-de-force that is by turns gripping, amusing, and startling.

The director, producer, scriptwriter and actors of a major Nazi propaganda film (working title: Song of Freedom) leave Berlin just before the end of the Second World War, on the pretext that they need to shoot some exterior scenes in an Alpine setting. In reality, they each have their own reason for this flight from Nazi Germany – from escaping the draft to avoiding detection as a homosexual.

Their flight takes them to a small village called Kastelau, in the shadow of Hitler’s Alpine retreat of Berchtesgaden. Here, they encounter an over-zealous party official, a warwounded soldier, and a female innkeeper with a secret. With only one roll of film left, they keep up the charade until the war is over, re-writing the story as they go along, always with one eye on political expediency and their post-war careers.

This engaging scenario is played out through a series of interviews, transcripts, questionnaires and Wikipedia articles that are presented as the evidence collected by Samuel Anthony Saunders, a PhD student from California in the 1980s. An introductory narrative describes an encounter between Saunders and the police at the ‘Walk of Fame’ in Los Angeles, where Saunders is apprehended in the act of vandalising a star that bears the name ‘Arnie Walton’. Walton is the anglicised name of Walter Arnold, one of the stars of the unfinished film Song of Freedom. The novel therefore sets out to explain why Saunders has developed such a hatred for Arnold/Walton.

In the process Lewinsky creates some excellent voices: notably those of the interviewee ‘Titi’ and the diarist and short story-writer Werner. Through its style and structure, the novel raises questions about the construction of narratives and pretensions of ‘truth,’ yet with plenty of humour.

The reader is invited to participate in the construction of the multiple story-lines, and here there are stylistic similarities with both Siri Hustvedt and W. G. Sebald. Posing as the ‘translation’ of an English manuscript, any English-language edition of this book would be interesting as the ‘restoration’ of an ‘original’ that never existed.

Charles Lewinsky was born in Zurich in 1946. He studied German and Theatre Studies in Berlin, and then worked in the theatre and as an editor. He has written numerous plays, novels and radio plays as well as over 1000 scripts for TV and film. His highly acclaimed novel Melnitz has been translated into ten languages and is forthcoming in English.

Nagel & Kimche was founded in 1983 and quickly established itself as one of Switzerland’s leading publishers. Emphasis is placed on the work of contemporary Swiss authors. In 1998 Nagel & Kimche joined the Hanser group of publishers.