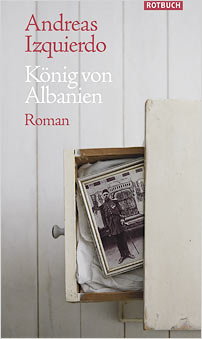 Time, March 1913. Place, a Salzburg lunatic asylum. Fellow nutcases, please welcome the latest addition to your ranks, Otto Witte, self-styled King of Albania. And welcome this flamboyant, larger-than-life character certainly is. His fellowpatients are fascinated by his colourful tales of his travels around the Orient and no less so is the hospital’s junior doctor, whose discussions with him form the basis of this account of how he achieved his elevated supposed status.

His tale begins in Constantinople in October 1912, on the eve of the First Balkan War, when Albania declared itself independent after 400 years of Ottoman occupation. As chance would have it, Otto – actor, salon-artiste and conman – bears a striking resemblance to Prince Halim Eddine, one of the Sultan’s nephews, tipped in diplomatic circles as an acceptable if outside contender to ascend the new throne. Assisted by his sword-swallowing travelling companion Max Hoffmann and Ismail Arzim, a friend in the Turkish military high command, he stages his audacious coup, bluffing his way through the enemy lines to Tirana in Albania and stepping in boldly to fill the royal power vacuum. His reign lasts for five days until the swindle is uncovered – by which time he has survived an assassination attempt, mobilised an army to oust Serbian and Montenegrin intruders, and set up his own harem. When his luck deserts him he runs for his life, is arrested at the Austrian border without any papers, and is eventually consigned to the Salzburg lunatic asylum, where the novel begins.

There never was a King Otto I of Albania, but there very much was an Otto Witte, who died in 1958 still maintaining his assumed title and whose probable psychosis was pseudologia fantastica. There is also a well of newspaper reports from the early twentieth century, on which Andreas Izquierdo has drawn in composing this picaresque tale, a fascinating illustration of people’s desire to believe what they want to believe against a backdrop of actual events. The characterisation sparkles, the plot shines, and we guarantee that if this book, deserved winner of last year’s Sir Walter Scott Prize, is translated into English and you curl up with it on the sofa, you won’t put it down until you’ve read to the last page.

Andreas Izquierdo was born in Euskirchen, North Rhine-Westphalia, in 1968. He grew up as the son of an engineer and a Spanish nurse. After graduating from high school he moved to Cologne to study. Later he worked in a publishing house specializing in books on sport. Today Izquierdo works as a freelance author in Cologne and is a member of an association of crime fiction authors called Syndikat. Recently his latest work received the Sir Walter Scott Award 2008 for Best Historical Novel.


Rotbuch Verlag is a small independent publishing house founded in Berlin in 1973. After changing hands and locations in the 1990s and at the start of the new millennium, it returned to its original home city in 2007. From its beginnings Rotbuch was home to both popular and literary fiction, drama and poetry as well as non-fiction titles with a strong emphasis on political issues, particularly with a left-wing slant. With its new hard-boiled crime label Hard Case Crime Rotbuch has been concentrating particularly on foreign as well as German-language crime fiction. Its authors include Birgit Vanderbeke, Heiner Müller, Hannah Arendt, Franz Xaver Kroetz, Mickey Spillane, Jerome Charyn, Peter Weiss, Gunter Gerlach and Nobel Prize winner Dario Fo.