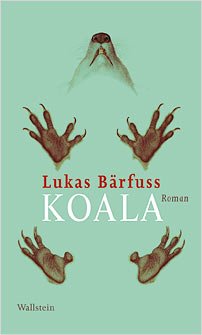 Koala tells the story of a man’s attempt to come to terms with his brother’s suicide. As he tries to piece together the facts and understand why someone might willingly choose to end his life, he is led to examine the reasons for living.

At the beginning of the novel, a writer returns to his home town to give a speech in commemoration of Heinrich von Kleist’s death. He takes the opportunity to meet up with his brother, who never moved away. They are not very close and have little to say to each other, but the meeting is highly significant – it is the last time they ever see each other. Just before Christmas, the writer is informed that his brother has killed himself.

The body is found fully clothed, lying in an empty bathtub where the man chose to end his life with an overdose of heroin. The suicide casts a shadow on the writer’s own life; he is shocked and deeply hurt by it and unable to let it go. He tries to find something in his brother’s biography that might explain what has happened. When he can’t, he turns his attention to suicide in general. He studies case histories, but comes no closer to understanding his brother.

Seeking new insights, the writer decides to take a closer look at his brother’s strange nickname, ‘Koala.’ At this point the narrative perspective changes, switching to third person, as a young boy on scout camp is subjected to a frightening initiation ceremony and given the name which will define his future: ‘Koala.’ A second break in the narrative takes the reader from Switzerland to the other side of the world. The history of the koala bear’s survival in a hostile environment is described, alongside harrowing stories of white settlement in Australia. The first-person narrator does not return until the final pages of the book, where he reflects on man’s fear of death, the effort it takes to survive and the silence that surrounds suicide.

Bärfuss tackles the subject of suicide in an unpolished monologue that attempts to channel the thoughts and emotions created by his own brother’s death, while also getting to the core of a subject that remains taboo.

Lukas Bärfuss was born in 1971 in Thun, Switzerland, and is one of the most successful German-speaking dramatists. His plays are staged all over the world. His extremely successful debut novel Hundert Tage (One Hundred Days) was nominated for the German and Swiss Book Prizes and translated into 17 languages. He has received numerous literary awards for his plays and his novel. Lukas Bärfuss lives in Zurich.