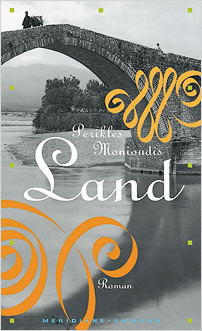 In this finely crafted, highly personal, and often poetic novel, we follow the wanderings of an anonymous traveller – a young Swiss diplomat – on a personal journey to retrace fragments of his parents’ and grandparents’ past in their migration around the Mediterranean, which took them from Anatolia to Alexandria and after that to Algeria, Cyprus, Italy, Greece, Albania and Barcelona. On the protagonist’s progress from port to port it is the search for the self that is the real leitmotiv of this tale, not his quest to find his grandfather’s lost recipe book full of patisserie secrets, left behind when the family fled Alexandria before the Six Day War. All the same, the traveller’s journeying does not cease until he has translated and transcribed the recipes contained in the leather-bound book and explored the many nuances for himself, tracing routes around the Mediterranean basin as he does so. There is romance – with a German botanist in Barcelona. But, as the lady comments, it is not for her to cure the traveller of his wanderlust, or to lead him from his desert which is the sea.

The reader may from time to time wish to retrace his steps to make certain he is on the right track. But soon it becomes clear that this is a story all about outsiders, moving on, fitting in or not, and about how, within a single generation, the overall pattern can change. Also increasingly apparent is the author’s motivation for the anonymity and coolness with which he portrays his main characters – they are homeless, yet strangely attached to the places where they roam.

This is a highly personal story and at the same time a fascinating snapshot of the European zeitgeist. It would encourage one to re-read – or acquaint oneself for the first time – with Fernand Braudel’s monumental study The Mediterranean and the Mediterranean World in the Reign of Philip II, or, for stylistic echoes, to sample Javier Marias’s Mein Herz so weiß or the poetic resonances of Orhan Pamuk’s Rot ist mein Name. Most of all, however, here is an evocative piece of literature that leaves one with the smell of the sea in one’s nostrils and the taste of sweetmeats in one’s mouth.

Perikles Monioudis was born in Glarus, Switzerland, and lives in Zurich and Berlin. His previous works have been translated into a number of languages and have been awarded various prizes including that of the Swiss Society of Authors and the Conrad Ferdinand Meyer Prize. In 2005 Monioudis was a visiting professor at the Massachusetts Institute of Technology (MIT), Cambridge, USA. Land is his first book with Ammann Verlag.

Rights to this work already sold to:
Hestia Publishers, Greece.

Ammann Verlag was founded in 1981 by Egon Ammann and Marie-Luise Flammersfeld and has since gained a strong reputation in the field of serious contemporary fiction and poetry from all over the world. Authors include Adonis, Thomas Hürlimann, Eric-Emmanuel Schmitt, Ruth Schweikert, and Ralph Dutli. Ammann Verlag is also noted for its rediscovery of such authors of modern classics such as Fernando Pessoa, Attila József, Ossip Mandelstam and Alejandra Pizarnik. Around thirty new titles are published each year by the firm.