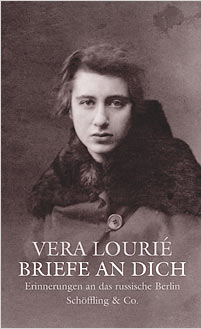 These sensitive and warm-hearted memoirs by the poet Vera Lourié (1901–1998) cast light on conditions in prerevolutionary Russia, as well as evoking pre-war Berlin when the brilliant Russian émigré community were culturally active.

Vera writes as an elderly woman, eking out her pension by subletting the rooms in her little flat. She is enjoying some belated recognition as a poet and a witness to life in Berlin during the War. Having fallen in love with her doctor’s wife, this new passion has inspired her to write her memoirs, in the form of letters addressed to her beloved. They cover her childhood in pre-Revolutionary Russia, her student days in Petrograd, and her experiences in Berlin before, during, and after the War. The letters are supplemented by short stories and poems.

Vera tells how her family escaped from the Bolsheviks and joined the émigré Russian community in Berlin, where she wrote articles and reviews for the many Russian journals that sprang up. She recalls her student days in St Petersburg where she knew Anna Akmatova and Osip Mandelstam. Another important strand evokes her childhood: family gatherings and happy summers in their dacha in Odessa. Her father’s conversion to Protestantism was instrumental in saving Vera’s life. Vera also writes of her current situation: poor and alone with her painful memories of the past, she longs for her darling.

Vera writes movingly about the Ostarbeiter – brought to Berlin to work as slaves. At the end of the war, women and children were forced to man the barricades and by the time the Russians arrived, the place was full of wounded children, with no water, fuel or food. The mood darkens again when she describes the Russian invasion: hiding in a basement with her neighbours, Vera would be pushed forward to negotiate every time Russian soldiers approached. Such memories distress Vera and she wonders if she will be able to complete her memoirs. At this point her account is supplemented by beautiful short stories, some of which describe dangerous run-ins with the police as a result of her black-market activities.

Towards the end of her life, Vera frequently appeared on radio and TV, and held poetry readings. Her account of how she profited as a black-marketeer under the Russian occupation provides an interestingly novel view of the period.

Vera Lourié (1901–1998) was born in St. Petersburg, Russia and belonged to a circle of poets around Nikolay Gumilev. She fled to Berlin with her family in 1921 and survived the Nazi Era, World War II, and the Red Army Invasion. A volume of her poetry was published in the 1980s.

Schöffling & Co. has a simple credo: the focus is on the authors. It has gained the reputation of being a ‘publishing house that plays a significant role in the shaping of Germany’s literary future’ (Spiegel online). Founded in November 1993, Schöffling & Co. has since emerged as one of Germany’s most innovative independent literary publishing houses with a tightly-woven international network. An atmosphere of mutual confidence and esteem and an unceasing commitment to its authors and their works provide the basis for a fruitful literary relationship. New German voices are recognised and published alongside established and famous names, while authors in translation include Sadie Jones, Olga Tokarczuk, Jennifer Egan, Peter Behrens, Nir Baram and Miljenko Jergovic.