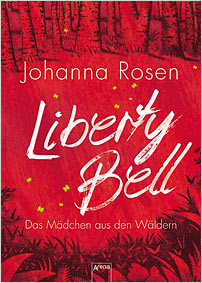 Johanna Rosen’s spectacular novel grips readers from start to finish. She tells the extraordinary story of a teenage girl who is discovered living wild in the forests of Oregon, USA and her bewildering encounters with twenty-first century urban life. The deeply disturbing mystery of the forest girl’s parentage is unravelled in the course of a sequence of dramatic revelations which have far-reaching implications for the small-town community.

When seventeen-year-old Ronan Horace shows his friends a video clip he has taken while out mountain-biking they can hardly believe their eyes. The video shows a completely naked girl running around in the forest and swimming in a pond. It looks as if the girl might be living wild. The boys insist upon seeing for themselves and Ronan leads them to the isolated spot where he found the forest girl. They watch the stark naked girl in amazement as she slaughters a small animal and sings in an unintelligible voice. Is she mad? How did she get there? Is she alone? Troubled rich kid Ernesto Merrill is particularly moved by the girl and tries to talk to her. She eventually tells him her name: Liberty Bell. Ernesto ends up spending the night in Liberty Bell’s hut, knowing that it is only a matter of time before the TV crews arrive.

The next day all hell breaks loose as police, medics and journalists descend on the forest. Liberty Bell is bundled into an ambulance and taken away to hospital. In the sterile medical environment she seems a completely different person to the tough forest girl. Ernesto refuses to give up on Liberty Bell and returns to the hospital repeatedly. A tender romance blossoms between them, fuelled by his sensitive attempts to initiate her into modern life. While Ernesto’s own dysfunctional family life is deteriorating, the search begins for Liberty Bell’s parents, exposing an ugly story of child abuse and exploitation. The story throws up many possible suspects as candidates for Liberty Bell’s father so that gradually almost all the inhabitants of the close-knit community are implicated in the events, but keeps readers guessing until its shocking and bloody conclusion.

Rosen captures the intensity and excitement of the boys’ discovery of the forest girl in immaculate prose. Her suspense-laden exposure of the grimly fascinating and decidedly murky history surrounding Liberty Bell’s birth turns the novel into a true page-turner. This enthralling and well-plotted story full of humorously engaging characters is guaranteed to appeal to teen readers.

Johanna Rosen is the pen name of a renowned German writer who was born in 1969 and has very successfully published books since 1993, several of which have been translated into other languages. With Liberty Bell. The Girl from the Woods she has switched genres, writing for teens and adults for the first time. The author lives in seclusion near Frankfurt am Main with her family.

Arena Publishing was founded in 1949 and is today one of the most important publishers of books for children and young adults in Germany. Arena publishes a broad range of titles in its fiction and nonfiction lists; its programme includes titles for all age groups – from toddlers up to young adults. Arena was the first German children’s book publisher to start a paperback programme in 1958. Books from Arena have won numerous awards and are translated into many languages. Arena is also the German home of internationally well-known authors like Cassandra Clare, Roderick Gordon and Brian Williams as well as Tove Jansson, Jo Nesbø, Unni Lindell and Neil Gaiman.