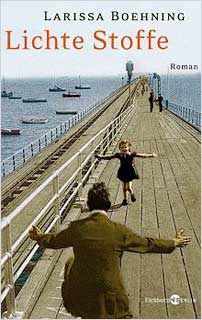 Three generations of one family are described in this rewarding and intelligent novel. The central character is Nele Niebuhr, a young shoe designer from Hamburg. Then there are her mother and father, Evi and Bernhard, who live in the family home in the city and whom crisis strikes when Bernhard is made redundant from his job but is too ashamed to admit this to his wife – or even himself – and so pretends to go to work at 7:35 a.m. every day of the week, as he would have done before. Finally there is Gudrun, Evi’s mother and Nele’s grandmother, who died a few years previously in Berlin and who in a sense provides the springboard for the whole plot when Nele listens to a cassette she recorded not long before her death. In this she reveals that, at the end of the Second World War, and in order to get food for herself and her starving mother, she embarked on a brief liaison with a black American soldier in Berlin, as a result of which dark-skinned Evi was conceived. Gudrun concealed her condition from the GI, who soon vanished without trace, but not before trying to make her a present of a looted Degas painting which she felt unable to accept. Nele, having listened to the tape, comes to a decision. Instead of travelling with her boyfriend to New York she will set out on a journey of her own, to track down both her grandfather and the painting.

There is much perceptiveness and depth in this novel: in the first section the contrast between the everyday lives of Evi and Bernhard and the complexity of their inner states, à la Ian McEwan; and again, later, the latent antagonism between Evi and Gudrun. And as an interesting sub-plot there is a good deal of detail about the fate of paintings and the significance of the illegal art trade during and after the war. ‘Heimat’, race, paternity, disillusionment, travel, desire – the story explores a whole range of big themes. But, above all, this is a character-based novel. The portraits are warm and personal and a kind of reconciliation is evident at the end – although, as in life, this is obviously to remain imperfect.

Larissa Boehning was born in 1971 in Wiesbaden, Germany, and grew up in a suburb of Hamburg. She studied cultural science, philosophy and history of art in Hamburg and Berlin. She was awarded the Prenzlauer Berg Literature Prize (2002) for one of the stories taken from her debut collection of short stories Schwalbensommer (‘A Swallow’s Summer’ – reviewed in nbg Autumn 2003). She now lives in Berlin while also holding a teaching position in creative writing at the Heinrich Heine University in Düsseldorf.

Previous works include:
Katzendreck (‘Cat Mess’) – Dimensions2, Volume 8, Number 1 Zaungäste (‘Something for Nothing’) – Decapolis. Tales from the cities, Comma Press.

Eichborn AG was founded in 1980, and is one of the few independent general publishers operating in Germany. Its strong and diversified list includes fiction and non-fiction, humour and reference books. It has two subsidiary lists: Die Andere Bibliothek (‘The Other Library’), founded by Hans Magnus Enzensberger, and Eichborn Berlin, which focuses on literary debuts in German. Many titles originally published by Eichborn have been translated into English, including W.G.Sebald’s The Emigrants and The Rings of Saturn; A Woman in Berlin by Anonymous (winner of the 2006 Schlegel-Tieck award); Karen Duve’s Rain; Walter Moers’ The 13 1/2 Lives of Captain Bluebear and Jan Costin Wagner’s Icemoon.