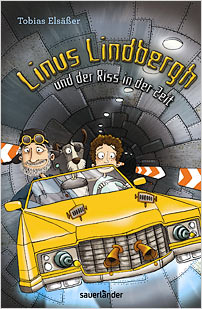 The first in a new trilogy, this is a rattling good read with elements of science fiction and mystery. It is imaginative and funny with plenty of suspense and emotional depth.

Linus Lindbergh (aged ten) lives between two airport runways. Deep beneath the airfield are secret laboratories where Linus’s grandfather and parents work on top-secret inventions. Linus’s best friend is Majus, a robot invented by his mother to do the housework – until he meets a new girl at school, Riana. She’s a bit of a loner, too, but she’s good fun. Gradually Linus lets Riana in on the family secrets, including his father’s Time Machine. Then they are abducted by his parents’ evil rival and transported into scenes from old blackand- white movie strips – but the planes and bullets that hunt them are real.

The lead characters are well drawn and engaging, while the host of minor characters bring dashes of colour and promise much for the later volumes in the series. The story is well paced, with plenty of action and dramatic tension, but also quieter, reflective passages where the reader is given an insight into Linus’s emotional world.

Tobias Elsäßer was born in 1973 and works as a freelance journalist, author and singing teacher. He also conducts workshops for young people in creative writing and songwriting and writes screenplays.

Sauerländer Verlag is renowned as a publisher of high-quality picture books and innovative children’s and young adult fiction and non-fiction.