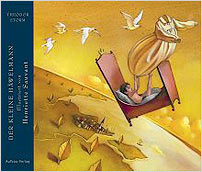 Henriette Sauvant’s arresting illustrations are the perfect vehicle to give new life to this wonderful bedtime story, one of the classics of its kind yet surprisingly little known to British readers. Her bright colours and vivid images capture the mystery and magic of the text, and the popular Rapunzel & Other Magic Fairytales (Egmont, 2006), which she also illustrated, is proof that hers is an appeal that goes beyond national borders.

A little boy called Häwelmann cannot get to sleep. His mother pushes him back and forth on his bed on wheels until she falls soundly asleep herself and his impatient cries of ‘More! More!’ are of no avail. What is a wideawake boy to do? Attaching his nightshirt to the end of his bed, he puffs and puffs into it until it becomes a sail. Round and round the room he sails until, at the Moon’s invitation, he slides out through the key-hole to sail round the world, his impatient cries of ‘More! More!’ now ringing through the sleeping streets and forests and starry sky. ‘Surely that’s enough?’ sighs a weary Moon. But Häwelmann is insatiable: ‘Shine, old Moon, shine!’ until even the Moon’s patience gives out and he leaves the boy to the darkness, the waves and, before long, the rising sun, sailing home in the boat of sleep and the unfurling of a new day.

Theodor Storm wrote this story for his eldest son Hans in 1849. Over 150 years later it is as fresh and magical as ever.

Theodor Storm (1817-1888) was born in the north-Frisian town of Husum which he called ‘that grey town by the sea’. The lawyer’s love of poetry and words was evident at an early age and he contributed significantly to the new German realism of the day. He wrote stories, poems and novellas and is perhaps best remembered for Immensee and Der Schimmelreiter (‘The Rider on the White Horse’).

Henriette Sauvant was born in 1967, studied illustration in Hamburg, and became wellknown for her beautiful book covers. She was nominated for the German Children’s Book Prize for Rapunzel and other Magic Fairy Tales (published in the UK by Egmont in Anthea Bell’s translation).