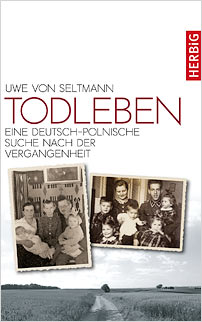 Uwe von Seltmann’s grandfather was a member of the SS who participated in the destruction of the Warsaw ghetto. His wife’s grandfather died on the way to Auschwitz in 1944. Did their paths ever cross? Von Seltmann’s account of the research which he and his wife conducted into their families’ pasts gives a uniquely personal take on a period of history that is of perennial interest to Englishspeaking readers.

The story begins in 2006 when von Seltmann meets a Polish artist called Gabriela in a cafe in the old Jewish quarter of Krakow. On their first meeting, they discuss their grandparents’ vastly divergent experiences during the Second World War. The couple fall in love and marry, despite initial objections from her family. Together they delve into their families’ histories. They travel all over Europe in search of long-lost relatives, including survivors of the atrocities committed by the Nazi and then the Soviet state, from remote areas in Eastern Ukraine to Spain. While many are happy to share their life stories, they also meet with opposition from those who would rather that the past be forgotten.

This is a deeply moving, skilfully narrated book, which conveys the complex reality of Europe today.

Uwe von Seltmann was born in 1964. He studied theology and first worked as a correspondent in Vienna, Berlin and Dresden, before serving as editor-in-chief for several Protestant weekly newspapers for seven years. Since 2008, he has mostly been living in Krakow, Poland, as a freelance writer and editor.

Verlagsgruppe LangenMüller is one of the most respected publishing companies in Germany. Their wide range of titles are published in many languages. The company continues to challenge conventional wisdom, setting trends in both subject and format, while maintaining a list that includes novels, biographies, non-fiction, giftbooks and books that entertain the entire family.