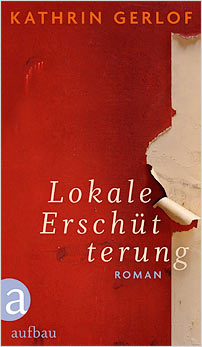 Gerlof’s novel of love, infidelity and motherhood throbs with emotional tension and suspense. Localised Tremor keeps readers guessing until the final chapter and demands to be discussed.

Veronika and Hanns are an unhappily married couple in their mid-forties, living in Berlin. Their sex life is unfulfilling and they have forgotten how to talk to one another. Hanns is an unemployed journalist and the onus has fallen on Veronika to generate enough income to support them both. We see her under pressure pitching to clients, while Hanns flounders in their apartment or wanders around the city. He periodically meets with a much younger friend called Daniel towards whom he feels a conflicting array of emotions and whose mannerisms remind him of someone else he knows. The reasons for Veronika’s profound unhappiness and Hanns’s relentless anger are revealed in their experiences of stillbirth, miscarriage and infertility. References to their stillborn son, also called Daniel, become as barbed weapons in their destructive conversational exchanges. There are also oblique references to another son of Veronika’s, born before her relationship with Hanns, whose existence remains a closely guarded secret. The reader is continually tantalised by the half-revelations contained in Veronika’s interior monologue and the possibility that this son is now trying to forge contact with his mother through some rather threatening letters. Veronika eventually seeks a hysterectomy and a conversation with her gynaecologist leads her finally to admit to the existence of her first son, all knowledge of whom she has concealed for nearly thirty years. Hanns accepts a job offer in a town some distance away, and when the couple begin to live separately both are ‘unfaithful’: Hanns begins to associate with the local hardline rightwing group and Veronika has an affair. Reunited, Veronika tells Hanns about her living child. Their suspicions focus on Hanns’s friend Daniel and the climax of the novel consists of the confrontation between Hanns and his putative step-son. In a shocking dénouement, Daniel dies when a night out with Hanns ends in assault by one of the town’s skinheads. We never learn whether Daniel is in fact Veronika’s son.

Through dialogue, interior monologue and third person narration, as well as the convincingly complex characterisation throughout the novel, Gerlof has pulled off a compelling portrayal of some of the contemporary challenges of marriage. A gripping read.

Kathrin Gerlof was born in 1962 and now lives in Berlin. She studied journalism before working as an editor for a variety of newspapers. She is now a freelance journalist, film-maker and author. Her debut novel Teuermanns Schweigen was published in 2008 and was acclaimed by buchkultur.de for its addictive ideas.