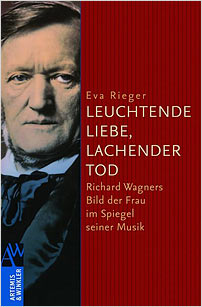 There is no doubt that Wagner’s music contains some of the most powerful portrayals in all opera of emotions, particularly love. This study is a well-researched, wellreasoned and exhaustive analysis of the role of women in Wagner’s operas, in which the author sets out to analyse the composer’s intentions and the way he realises them, using material concerning his own character and life to shed light on his compositions. She describes his marriage to Minna – the wife who adored him but found his hand-to-mouth lifestyle and philandering hard to bear and who knew that she could not enter into the world of his musical inspiration as Mathilde Wesendonck and Cosima von Bülow (whom he later married) were to do. Mathilde, however, rejected him to return to her husband and Jessie Laussot, the musical English-born wife of a Bordeaux wine merchant, withdrew on the eve of their elopement – both events terrible blows to Wagner’s overweening ego.

Wagner’s very varied portrayal of the relationships of the sexes is here revealingly interpreted. He was dependant on the women he was involved with as much for their wifely, even motherly, support and comfort in his daily life as for his sexual and emotional needs and desire for artistic understanding – in fact, he always needed a woman to dance constant and comprehensive attendance on him. There was no doubt that he regarded women as subservient to men. This comes out not only in his life but also in his works, where we see the power of their sexuality posing a threat to male dominance.

The author’s analysis of this situation rests convincingly and comprehensively on the music itself – the composer’s choice of key to indicate mood; the curve of his melodic line to reflect pleasure or pain, joy or despair; his orchestration, using specific instruments to portray gender characteristics. We have here, in short, a contribution to Wagnerian studies which all informed admirers of the operas will enjoy immensely.

Eva Rieger was Professor of Historical Musicology from 1991 to 2000 at the University of Bremen in Germany. She is the acknowledged leader in the field of gender-specific music research. Her biography Minna und Richard Wagner was published by Artemis & Winkler in 2003.

Please note: The translation into the English language will be funded by the Mariann Steegmann Foundation. The introduction has been translated into English by Professor Chris Walton and is available from the publisher.

Artemis & Winkler, a publishing house rich in tradition and formerly two separate publishers founded in the 1940s, came together in 1971 and has been part of the Düsseldorf Patmos publishing group since 1995. The list has two main components: in literature there is a bilingual classics list called Sammlung Tusculum with texts in both Greek or Latin and German, while the bibliophile series Winkler Weltliteratur is dedicated to the publishing of classics in world literature. The non-fiction list comprises works on social politics and cultural history as well as portraits on figures from music, art, literature and history. Rounding off the programe are popular literary calendars and travel literature.