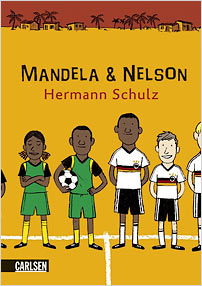 Nelson and his sister Mandela, twelve-year-old twins, live near a fishing harbour on Zanzibar Island in Tanzania. Their father supports his family by running a snake zoo for the tourists. Nelson’s job is to gather frogs and other small beasts before school to feed the snakes.

His main pleasure in life is playing football with his sister and their friends. The team includes three girls in defence, and some brilliant players whose attendance at practice is erratic because they have to work. This particularly is the case for the squad’s star player, Said, who spends all day gutting fish to support his fatherless family.

The township is brought to life by the protagonist who chatters away about his family, the slave trade, the locals, including two Catholic priests and the Muslim head teacher, and, of course, the tourists.

Nkwabi, the team’s trainer, steps off the boat one day with some stunning news – a German football team is coming to town and he has invited them to play the local team. There is great excitement, but it gradually dawns on them all that they have no pitch, no goal-nets, no boots, and no strips. Nelson’s resourcefulness in seeking solutions to these problems is ingenious: the pitch is marked out by tracing lines of white sand on the open space, which is regularly traversed by herds of cattle, and fishing nets are borrowed. He approaches the town’s local hero for advice – a footballer who at one time played for a German team but now plays the financial markets.

When the German boys arrive, Nelson realises to his embarrassment that one of his brain-waves was ill-conceived: that of the teams playing without their shirts on so the teams could be distinguished by their skin colours – there are brown and black-skinned boys in the German team, too.

The game is described with verve and, of course, the local team wins in spite of the stampede of cattle in the last five minutes: Said’s brilliant footwork saves the day and the whole township celebrates.

While issues of colour, as well as sorcery, drugs and gender equality, are lightly touched upon, it is the issue of poverty that dominates, adding depth to an entertaining and heartwarming read by an author who knows Africa well.

Hermann Schulz was born in Nkalinzi, East Africa, in 1938 and grew up in Moers-Repelen, Germany. After an apprenticeship as a bookseller he set off on his travels through South America, Africa and the Orient. From 1967 to 2001 he managed the Peter Hammer Verlag in Wuppertal. His novels have been highly acclaimed, and his awards include the Von der Heydt Culture Prize in 1982, the Hermann Kesten Medal in 1998, and the Art and Culture Prize for International Understanding in 1999.