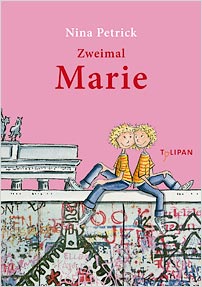 In this perceptive and very funny tale for pre-teens it’s 1989, and ten-year-old Anne, from Hamburg, is setting off on a school trip to Hungary. Anne’s father (as she believes) is dead, and she and her mother live in a commune. Anne wishes she could have a ‘normal’ family, and that her mother had more time to spend with her. On the way her teachers talk about the complaints that people from East Germany are starting to make about conditions on their side of the Wall, and Anne reflects that it’s a good thing her mother, as a journalist, got out when she did.

They arrive in Hungary at the same time as a group from East Germany, and Anne is startled to see a girl, Marie, who looks exactly like herself. They discover that they share a birthday. Marie is from Berlin, and lives with her father – and they are, of course, twins, now divided by the Wall. As the two groups prepare to go home, Anne and Marie swap places. They’ve given each other a basic briefing about their respective lives and how to behave, but being ten, of course, they tend to leave things out. In East Berlin, Anne is immediately struck by how grey everything is, and how there don’t appear to be any shops.

Meanwhile, in Hamburg, Anne’s mum thinks there’s something slightly odd about Marie. Evi, the little girl of the other family in the commune, refuses to believe that she actually is ‘her’ Anne. Marie finds school in the West baffling – the classrooms aren’t silent, sports are adjusted so that even the weaker pupils have a chance, and worst of all in Drama they’re expected to improvise! In the meantime in East Berlin, Anne comes a cropper when asked to heat the flat. Where does the coal go?

By now, though, Marie is missing her father and Anne her mother. Anne’s teacher starts to get suspicious, and she sends a letter to the girl’s mother. Marie tries to intercept it and fails, then confesses all. Her mother breaks down and tells her the whole story, then mother and daughter drive to Berlin, their arrival coinciding with the fall of the Wall. There is a happy reunion, and father and mother realise they have stronger feelings for one another than they thought. The family is united, and so is Germany.

Nina Petrick was born in Berlin in 1965, and studied German Literature and Art History. In 1997 she won the Peter Härtling Prize for Die Regentrinkerin. Today she writes children’s and youth fiction for several publishers and for the radio. Petrick lives with her husband and daughter in Berlin.

Tulipan Verlag is an independent publisher of quality children’s books, established in Berlin in 2006 by Sascha Simon and Mascha Schwarz. Its appearance has been warmly welcomed by booksellers and readers alike:

‘A treasure-trove of books that awaken a desire to read, discover, observe.’– Eselsohr

‘Wonderful picture-books … Tulipan Verlag is up there with the best.’– taz

It includes established authors and illustrators such as Paul Maar, Stefanie Harjes and Martin Klein as well as promising newcomers.