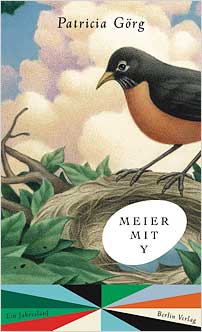 Meyer is the name of the main and only character of Patricia Görg’s latest novel, which is organised in twelve chapters, narrated in the present tense and the third person, and unfolds in the form of stream-of-consciousness. The reader follows Meyer on car rides and walks and watches TV with him. He is not what one could call a likeable character, his main characteristic being extreme miserliness. His wife – or the memory of her – stirs feelings within him, but here again it is not her absence that makes him sad but his loneliness.

The title of the book relates to the fact that in recurring scenes the ‘Y’ in Meyer’s name parts company with him (being replaced by an ‘i’) and becomes a living letter with a personality of its own. It accompanies him and rescues him when he is in danger.

Apart from the main plot detailing Meyer’s everyday life and the many dreamlike sequences, the reader will identify a third level. At regular intervals, the description of Meyer’s existence is interrupted by descriptions of natural phenomena in the style of a film documentary or a book of popular science about flora and fauna. At one point, for instance, there is a detailed description of a toad and its activities, implying a parallel between the day-to-day occupations of other forms of life and human behaviour, thus putting these into perspective: human action is as meaningless or meaningful as that of feeding, breathing, procreating animals. These scenes also show how human society lives right next to, but almost totally separated from, nature, which is an aspect of the social criticism addressed in the novel.

The book’s particular strength is its language, particularly when used in one of Görg’s brilliantly observed metaphors and descriptions of the everyday. When the author employs her linguistic talent to uncover the petty-bourgeois worries most people occupy themselves with, the novel becomes strikingly and memorably cynical. Here, then, is an experimental novel replete with good ideas, moments of brilliance and unconventional observations. A short and unusual treat, very much sui generis.

Patricia Görg was born in 1960 in Frankfurt am Main. She studied Theatre, Sociology and Psychology and is now a freelance writer, living in Berlin. She has written extensively for newspapers and radio, including a number of radio plays for which she has received awards. She read an extract from Glücksspagat at the Ingeborg-Bachmann competition in 1999, for which she received the Telekom Stipendium.

Berlin Verlag was founded in 1995 as an independent publishing house. It produces literary fiction and quality non-fiction for a wide audience by a select range of international authors. Berlin Verlag is also known for its work in fostering promising young German writers such as the now acclaimed Ingo Schulze, Elke Schmitter, Irina Liebmann, Marcus Braun and Gila Lustiger as well as publishing the plays of Elfriede Jelinek, Nobel prizewinner in 2004. Since 2003, Berlin Verlag has belonged to the Bloomsbury Publishing group. After the successful launch of the children’s books list, Bloomsbury Kinder- & Jugendbücher, in 2003, a new imprint, Bloomsbury Berlin (headed by the Number One Spiegel bestseller, Schott’s Original Miscellany) marks the second phase of its development.