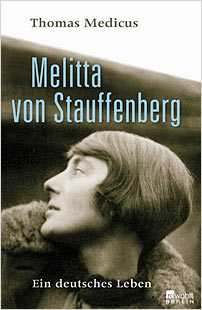 Medicus has filled an important gap in a familiar story with this new appraisal of the sister-in-law of Claus von Stauffenberg, the famous would-be assassin of Hitler. In Nazi terminology a ‘half-Jew’, Melitta made a vital contribution to the Nazi air-warfare machine, not only running her own research facilities but also acting as a test pilot for such tactically significant manoeuvres as dive bombing. All went well until July 1944, when she was taken into custody in line with the Nazi practice of making family members of enemies pay for their relations’ activities. However, her imprisonment did not last long and she spent as much time as possible during the following year trying to help other family members, until she was shot down herself in April 1945.

Thomas Medicus was born in 1953 in Germany. After completing his PhD he wrote for a number of newspapers including the Frankfurter Allgemeine Zeitung. Thomas Medicus is a freelance writer and lives both in Berlin and Dolgie, Poland.