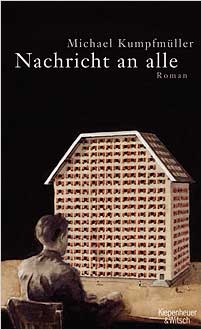 Selden is the Interior Minister of an unnamed country that is probably meant to be Germany. At the start of this novel he receives a text from his daughter Anisha, telling him she loves him but the plane she’s on is about to explode. She is killed. Terrorists are blamed, at least initially. Selden plunges himself into a resolutely manly world of political campaigning, all suits and assistants and press conferences.

Meanwhile the country is, like Selden’s own marriage, in a state of near collapse, with strikes, riots and exploding cars. Alternating chapters, some in the first person and some, like Joshua Ferris’s novel Then We Came to the End, in the first person plural, introduce us to an unstructured group of terrorists and pranksters with names like Rubber, Tick, Trick and Track, Mania and Tarsa. The riots crank up, leading to the destruction of both churches and mosques, to several deaths, and eventually to the public auto-da-fe (described in compellingly horrible detail) of Tarsa. This ghastly spectacle seems to bring some sort of catharsis, and is coincidentally followed by flooding, which seems to calm everyone down. Once the rioting has subsided, however, Selden begins receiving death threats. In a restaurant, where he is eating with his journalist girlfriend Hannah, something unspecified happens (assassination attempt? heart attack?) and he ends up in hospital. But after his recovery his standing in the polls soars.

And then we get to the final chapter, which represents a jump of some thirty years from the end of the novel up to that point. Selden has been elected president of his country, but suddenly resigns after two and a half years. He has a son, Mattis, a rising lawyer with a girlfriend also called Anisha. But now, well on in his eighties, he lives in a ‘park’ which, like other such ‘parks’ for once-important oldies, is a cross between a retirement home and an internment camp.

Futuristic novel? Alienated political thriller? Take your choice. Certainly a deliberately and effectively bleak look at how people fail to make contact with one another, on both the political and the personal level, and extremely well managed at that.

Michael Kumpfmüller was born in Munich in 1961 and now lives and works as a freelance author in Berlin. In 2000 his first novel, Hampels Fluchten (The Adventures of a Bed Salesman), was published to great acclaim.