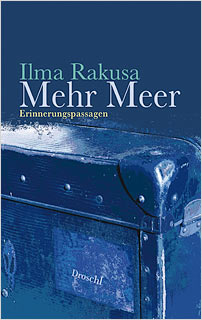 Mehr Meer is one woman’s evocative account of a nomadic childhood and youth in the 1950s and 1960s, a poignant memoir that richly deserves its place on the bestseller lists and the award of the Swiss Book Prize.

As a child, Rakusa was an outsider, a stranger in each of her transient homes where her family lived in rented apartments with the suitcases open and ready to go. She was a girl who spoke four languages, who loved Dostoevsky and Catholic ritual, Bach and Jewish mysticism, who studied her atlas and crossed continents in her head, who longed for the sea in a country without a coast.

Mehr Meer offers up short vignettes that centre around key memories – the discovery of a favourite author, a conversation with a grandparent, games with a childhood friend, first kisses, piano practice, playing with dolls … And the beauty of the book lies in the descriptiveness of the language. Rakusa conjures up the loneliness of the nursery during an enforced siesta, the joy of wearing knee-high socks (a sign that summer is on its way), the dizziness that follows an imaginary journey across the deep-blue ocean.

Borders and journeys loom large. Rakusa’s roots are in Eastern Europe, hidden behind the most forbidding border of them all, the Iron Curtain. After the nomadism of her early childhood, during which Rakusa longed for her parents to settle in one place, she develops a yearning for travel. In a sense, Rakusa’s travelling is a search for home – and as such, it is a quest that can never be fulfilled, although each journey is a delight. But more important to Rakusa than physical travel is the exploration of the inner geography of the mind, the boundless inner space that she first discovers through Dostoevsky.

Poetry, songs, dialogues, and synopses of novels are woven into Rakusa’s prose. The style is simple, reflective, probing – poetic without being pretentious. Rakusa’s personal story intersects with wider European history and culture, but its principal appeal lies in the beauty of the writing and the skewed perspective of someone standing slightly to one side. As a child, Rakusa realizes that sentences like ‘the grass is yawning’ are liable to cause consternation; in Mehr Meer unusual associations, impressions and perceptions give the narrative its magic, revealing the fascination of simple childhood moments.

Ilma Rakusa was born in 1946 in Slovakia, and has lived in Zurich since 1951. She is a translator (of, amongst others, Anton Chekhov, Marguerite Duras and Imre Kertész), literary critic and journalist, writing for the Neue Zürcher Zeitung and Die Zeit. Rakusa is a member of the German Academy of Language and Literature, and has won several literary and translation awards, including the Adelbert von Chamisso Prize and – in 2009 for Mehr Meer – the Swiss Book Prize.

Literaturverlag Droschl is based in Graz, Austria’s ‘secret capital of literature’, and is devoted to promoting contemporary authors in the German language and others. Droschl’s first book was produced in 1980 when the decision was taken to convert the eponymous gallery-cum-bookshop into a publishing house. Authors include Gerhard Roth, Eleonore Frey and Peter Waterhouse. Poet Ernst Jandl praised Droschl Verlag as ‘a courageous and dynamic enterprise’.