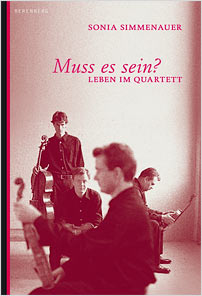 Have you ever wondered how those four quiet and respectable-looking people who have just walked onto the stage of the Wigmore Hall, made you a modest bow, and are about to enchant you for an hour and a half with the most exquisite music by Brahms, Boccherini or whoever you have come to listen to actually live and work? Well, here is a book to tell you all. It is mainly anecdotal, written in short chapters, and covers every aspect of its subject from the most incidental to the most complex.

It deals, on the historical level, with the development of the string quartet itself (including a lovely section on the Schuppanzigh and Böhm Quartets and Beethoven’s opinion of them). It covers social conventions of the past and includes a chapter that looks at the genre from a psychoanalytical angle (Sonia Simmenauer’s husband is a psychoanalyst). It even succeeds in weaving the author’s own biography into the narrative, from the birth of her two children to the rival demands of family and profession.

There are fascinating insights into the differences in outlook between soloists and quartet players. Eugene Drucker, violinist in the Emerson Quartet, says: ‘In the first ten years of its existence, a quartet works for the most part at playing as homogeneously as possible. The next ten years are spent trying to play heterogeneously.’ Similar provocative observations pepper the rest of the book: ‘It is not primarily love that unites the four players, but love for the work.’ ‘Rehearsals are there to rehearse what has been practised. Rehearsals are not for practising.’ Technical considerations are discussed in refreshingly simple, jargon-free language: there’s a fascinating and amusing paragraph, for example, on a passage from Bartók’s Third String Quartet which should be played by the first and second violin on the G string. Because it’s easier to play in tune on the D string, most players cheat!

Some of the most intriguing passages in the book are those that deal with management: travel, food, pay, pre-concert nerves, theft, tantrums, not to mention losing the music for a concert only hours before it is due to begin. In short there is almost no aspect of a quartet’s life that this book, with its allusive joke title, leaves uncovered. A veritable triumph.

Sonia Simmenauer was born in 1963 in the USA, grew up in Paris and has lived in Hamburg since 1982. It is from there that she heads the Impresariat Simmenuer, an agency managing the affairs of musicians. Among her clients are some of the most famous string quartets (Alban Berg, Guarneri, Arditti, Vogler, Petersen, Artemis, Hagen, Kuss, Quattuor Ebène, Tokyo String Quartett, and many others), as well as individual artists such as Gidon Kremer, Kim Kashkashian, Isabel Faust and Kolja Blacher.