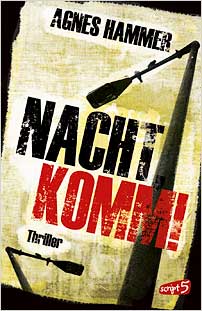 This gritty thriller successfully combines the genres of teen and crime fiction, set against the backdrop of a football World Cup. Reminiscent of Stieg Larsson’s Lisbeth Salander, the protagonist Lissy is unusual, not to say dysfunctional, and much of the interest of the story lies in her development as a character.

Sentenced to community service in an old people’s home for shoplifting and assault, Lissy makes friends with Nele, and through her gets to know Daniel, Nele’s on-off boyfriend. Lissy is strongly attracted to Daniel, and he apparently to her, and they become sexually involved. After an argument over Daniel, Lissy shoves Nele against a locker, scratching her arm on Nele’s bracelet. The next evening, Nele is found dead by the rubbish bins outside the home.

The police’s suspicions quickly fall on Lissy: she has been in and out of trouble throughout her childhood and traces of her DNA are found on the bracelet. And she can’t provide an alibi: on the night of the murder, Lissy’s homeless father collapsed in the street, and instead of going straight to the hospital to be with him, Lissy went off looking for Daniel. Unable to find him at their agreed meeting place, Lissy spent the night wandering around the city on her own.

One policeman in particular seems convinced of Lissy’s guilt; he also happens to be a close friend of Daniel’s father, and fails to investigate other possible suspects properly, including Daniel himself. He even lets slip to Daniel that there is a potential witness to the crime in the form of a one-eyed homeless woman. Before they can question her again, however, she is found unconscious, poisoned by antifreeze that has been mixed into a bottle of lemonade. Lissy decides to investigate Nele’s death for herself and discovers uncomfortable truths about Nele and Daniel, before solving the mystery of Nele’s death in a tense and unexpected conclusion to the story.

This is an extremely readable novel, and its dialogue is particularly well-crafted. It is also very thought-provoking: from its depiction of the prejudices at work in police investigations to Lissy’s interaction with her father. He is one of a group of alcoholic homeless people who passersby would usually go out of their way to avoid, but who also – as this tale shows – have families, pasts, and their own stories to tell.

Agnes Hammer grew up with five siblings in Westerwald in Germany, before moving to Cologne to study German literature and philosophy. Today she works at an institute teaching young adults from difficult social backgrounds. Since 2005 she has also worked as an anti-aggression trainer. Hammer was awarded the prestigious ‘Kranichsteiner’ scholarship for the exceptional Herz, klopf!, published by script5. She also received the ‘Kurd-Laßwitz’ scholarship this year.

Loewe Verlag was founded in 1863 by Friedrich Loewe in Leipzig. It is one of the oldest and most important children’s books publishers in Germany. In the early twentieth century, Loewe published fairy tales, children’s classics and picture books. Heinrich Hoffmann’s Struwwelpeter (1903) and other great classics were first published by the firm. Today Loewe publishes a broad range of titles, from picture books to high quality children’s fiction, and non-fiction for both children and young adults. Authors include Cornelia Funke and Kai Meyer.