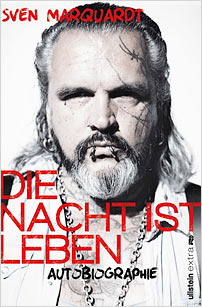 This is the autobiography of Sven Marquardt, doorman at Berghain, the ultra-cool Berlin nightclub. Located in a former power station in East Berlin, Berghain is well known internationally and has become one of Berlin’s biggest tourist magnets. Regarded by many as the epicentre of the world’s techno and party culture, the queues outside the building are legendary – clubbers habitually wait for three or four hours, only to be turned away by the doorman. Blogs and internet forums discuss the best strategies for getting into Berghain, which is also the focus of the last chapter in this book.

To most people, Marquardt is known only as the heavily tattooed and greatly feared Berghain doorman. Night Life delves deeper and reveals Marquardt’s fascinating life story. Born in 1962 in the GDR, the year after the Wall was built, he grew up in East Berlin’s Pankow district. As a teenager Marquardt became part of a thriving gay scene, socialising with Prenzlauer Berg’s bohemian artistic community and living in one of the district’s characteristic old apartment blocks. Later he trained as a photographer and worked for a prestigious GDR fashion magazine. After the fall of the Wall, Marquardt, like many of his friends, struggled to come to terms with his new life. His edgy, darkly glamorous photos were rejected by fashion magazines in the West as they did not fit with the cliché of the ‘dull, grey East’. For some years Marquardt abandoned photography altogether, working in a West Berlin shoe shop and spending the 1990s taking drugs, nightclubbing, and getting pierced and tattooed. He eventually began working as a bouncer in East Berlin’s techno club scene, and the vast, semi-derelict, former industrial buildings where the clubs are based prompted his renewed interest – and success – in photography. The book is full of Marquardt’s own photographs as well as portraits taken by his friends.

This is an absorbing snapshot of life in the GDR, of pre-gentrification Prenzlauer Berg, and a countercultural coming-of-age story played out both in the old East and in the new unified Germany. Marquardt’s life story is all the more interesting precisely because it is not a typical GDR resistance story. Despite being observed by the Stasi, he managed to carve out a fulfilling life of extreme individuality and hedonism. The derelict, dark beauty of Germany’s capital is magnificently evoked in the book – an alternative love letter to Berlin.

Sven Marquardt was born in East Berlin in 1962. He trained as a photographer and had a number of jobs in the late eighties. He began working as a bouncer at various Berlin clubs in the early nineties. Since then he has been involved in numerous art photography projects and has published books of photography.