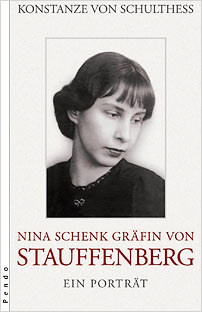 Written by Nina von Stauffenberg’s youngest daughter, Konstanze, this is a portrait of the widow of the colonel who attempted to assassinate Hitler in what became known as the July Plot. The biography opens with a striking scene: on 21 July 1944, a peaceful summer’s day, Nina calls her two eldest sons to her and tells them that their father ‘made a mistake’ and so was executed during the night. ‘Providence protected our beloved Führer’, she adds, thus not only bringing them the news of their father’s death but also destroying their perception of him: no longer a brave officer, but a traitor. The boys wouldn’t find out until the end of the war that their father was in fact a hero, and that their mother had lied to them to protect them.

The Nazis’ ‘Sippenhaft’ policy, whereby all family members were held liable for crimes or treason perpetrated by one member, meant that Nina knew that she, her children, and many other members of their extended family would be arrested and questioned, and possibly executed. The Gestapo came for Nina two days later, and there began almost a year of solitary confinement, first in SS prisons, then in the Ravensbrück concentration camp, and finally in hospitals. During all this time Nina was pregnant with her fifth child, to whom she gave birth while still imprisoned, not knowing if the child would be taken away from her, or if she herself would be executed once the child was born.

If Nina’s 1944-45 story forms the core of this biography, it is by no means the only material included. The author traces her parents’ childhoods, their courtship and their marriage relationship, and also brings in the stories of her grandparents and other relatives, among them Nina’s sisterin- law, a Jewish test pilot so valued by the Nazis that she was given equal status with Aryans, and her mother who, having passed through Ravensbrück, died of typhus in a camp in Matzkau in February 1945.

This is the first account of any of the wives of men connected with the July Plot, and it well deserved to be set down.

Konstanze von Schulthess is the youngest daughter of Nina Schenk Gräfin von Stauffenberg, the wife of Claus Schenk Graf von Stauffenberg, the man who attempted to assassinate Hitler. Konstanze von Schulthess was born in prison, as her mother was arrested after the assassination attempt. Together with the other members of her family, Konstanze spent her childhood in the house of her grandmother in Lautlingen and in Bamberg. Since 1965 she has been living in Switzerland. She is married and has four children.

The Literarische Agentur Kossack is a literary agency in Hamburg which represents the foreign rights of the Pendo Verlag. The agency also handles the rights for other publishing companies such as marebuchverlag, Rotbuch and Fahrenheit. In addition it acts on behalf of about eighty authors of fiction, non-fiction and children’s books. The agency was founded in 1995.