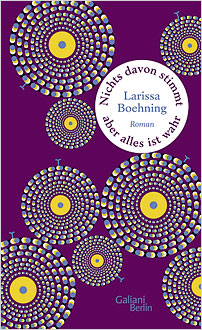 None of It’s Right, But It’s All True is a deceptively simple novel with a gripping plot. The narrative is cleverly layered around the kernel of one character’s story, with each protagonist adding their own fiction to the truth.

The novel focuses on three principal characters: Juliane, Matthias and Annemarie. Juliane, an advertising copy-writer, begins by describing Matthias’ appearance on her doorstep. Matthias is an insurance salesman and an expert con-man with a knack for presenting himself as exactly what other people want him to be. He has a sideline in creating fake online dating profiles for money. Juliane initially falls for Matthias but becomes suspicious when he disappears for weeks at a time. A chance sighting of him with an elderly lady leads her to start following him. She discovers that Matthias has made himself indispensable to an isolated old woman, Annemarie, who has a substantial fortune and a terminal illness. Having established what Matthias is up to, Juliane contacts Annemarie herself, intending to warn her. In the course of their conversation, the old woman volunteers to tell Juliane the story of her childhood in rural Germany, if she will write it down for posterity.

When Annemarie dies, Juliane goes to her house in the hope of rescuing the material for her biography, which Annemarie has described as the most valuable thing she has. But she arrives too late: Matthias, who the authorities now believe to be her son, has instructed a company to clear the house. The plot takes a final twist when Juliane spots a woman and two children getting out of Annemarie’s old car: did Matthias manage to conceal a wife and family from everyone as well? Matthias remains impossible to pin down as he slips in and out of his own fantasies, sometimes almost believing in them himself, while Juliane deliberately tells lies to get what she wants and then reveals the truth, unable to bear the guilt. All these layers of deception add up to something much more than a piece of traditional storytelling, as readers are required to interpret events and draw their own conclusions.

The winning combination of a tongue-in-cheek look at the vagaries of modern life and historical reflection in None of It’s Right, But It’s All True is sure to appeal to an English-speaking audience, who will be introduced to Larissa Boehning’s work when her short story collection, Swallow Summer, appears in translation later in 2014.

Larissa Boehning was born in 1971, lives in Berlin and works as a graphic designer, lecturer and freelance writer. Her debut novel Lichte Stoffe (‘Light Materials,’ 2007) was longlisted for the German Book Prize and received the city of Pinneberg’s Culture Prize and the Mara Cassens Prize for best debut novel in 2007. Her last book was Das Glück der Zikaden (‘The Song of the Cicadas’).