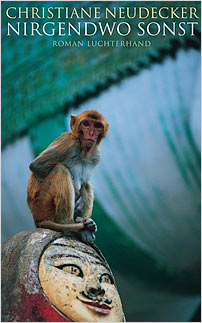 This is a novel about how a journey to Burma at a critical stage in his life helps a young man to come to terms with his recent past and opens up the future. When we first meet him, this unnamed narrator is searching Mandalay for Sine, a Danish girl he recently met and fell in love with but whom he has lost after a quarrel.

To complicate matters, the narrator also has a girlfriend back in Berlin, a theatre director who grew up in the old GDR and made a daring escape in her teens into West Berlin. She too has travelled in Burma and must, thinks the narrator, have felt a particular affinity for the country, divided as it is between the prettified areas that tourists are allowed to see and those in the brutal grip of the military, a situation not dissimilar in feel to that in the old GDR. In a mountain village in Burma she had met opponents of the military regime and taken photographs home to show to the narrator. But shortly after her return a fire in their Berlin flat and a jump from a third-floor window have left her in a coma from which she is not expected to recover.

The young man’s journey to Burma has the ostensible aim of giving the developed photographs to the people of the village concerned. Its deeper purpose, however, is for the narrator to come to terms with his situation, an attempt to find what is called ‘closure’. In an ill-fated and confused moment, in front of Sine, he assumes his Berlin companion’s experience, pretending that it was he and not she who made the dangerous escape to the West. The final break-up of their relationship, however, is a later event, when she glances inside his passport and discovers his place of birth: Cologne, thus very much the West.

It comes as no surprise to discover from the acknowledgements that Neudecker has herself travelled in Burma and shares with her characters a deep concern about the political situation of that country. The result is not just a gripping and absorbing tale, and a very pleasurable read, but a book that will stay in the reader’s mind during what look like being troubled times for Burma still ahead.

Christiane Neudecker was born in 1974 and studied theatre directing at the Ernst Busch Theatre School in Berlin. In 2005 she published her prose debut, a book of short stories entitled In der Stille ein Klang, for which she received the Wolframvon- Eschenbach prize and other recognition. Nirgendwo sonst is her first novel.

Luchterhand Literaturverlag was founded by Hermann Luchterhand in 1924 and has been publishing literary titles since 1954, an early and triumphant success being Günter Grass’s novel Die Blechtrommel (1959). Its list includes literary fiction and poetry, as well as scrupulously prepared editions of authors’ complete works. In 1997 the firm was voted Publishing House of the Year by the German trade journal Buchmarkt. Luchterhand is now part of the Random House Group. Authors include Christa Wolf, Ernst Jandl, Pablo Neruda, António Lobo Antunes, Will Self, Frank McCourt, Hanns-Josef Ortheil and Terézia Mora.