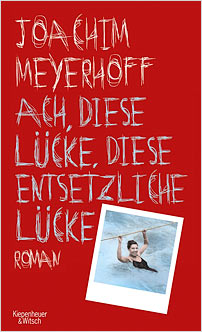 With the publication of his latest novel, the bestselling trilogy by German author and renowned theatre actor Joachim Meyerhoff is now complete. Immensely successful and masterfully crafted, these books stand alone as masterpieces of autobiographical fiction and together create a stunning trilogy. And all three are ripe for translation into English.

Alle Toten fliegen hoch: Amerika (‘All The Dead Fly Up: America’, 2011), Wann wird es endlich wieder so, wie es nie war (‘When Will it Finally be Like it Never Was Again’, 2013) and Ach, diese Lücke, diese entsetzliche Lücke (‘Oh, This Void, This Unspeakable Void’, 2015) chart different formative periods of Meyerhoff’s life. The books started out as a six-part one-man show simply called Alle Toten fliegen hoch, which Meyerhoff performed to great acclaim before he transformed it into the trilogy of books it is today. The first two books quickly became bestsellers and the latest title is Kiepenheuer & Witsch’s second most ordered book for autumn.

‘Oh, This Void, This Unspeakable Void’ articulates Meyerhoff’s turbulent time at drama school in Munich while living with his eccentric grandparents. Somewhat out of the blue, he auditions to attend the Otto Falckenberg Acting School, making it through the first round of excruciating auditions. The second audition is even worse and Meyerhoff prepares himself for a career in medicine, but to his surprise he is accepted as one of nine students out of over 900 applicants.

His grandparents live in an immaculate villa in a high-class district of Munich, where they spend their time fixed in an everrepeating routine that mainly revolves around alcohol. They drink at regular intervals throughout the day, and young Joachim tries to keep up: champagne for breakfast, white wine at lunch, whisky at six, red wine with dinner, a Cointreau nightcap. Inge, Meyerhoff’s grandmother, is a semi-retired actress herself and is a hilarious, fussy diva who can recite entire roles from memory.

Meyerhoff’s time at the school is frustrating. For the reader, knowing that he is now a wellregarded actor makes his many embarrassments, failures and his constant fear that he’s not cut out for the profession even more amusing. He can’t sing, he’s told his voice is boring, he feels self-consciously tall, and his tutors frequently tell him that they question whether he should have been admitted to the school in the first place.

At home with his grandparents he feels more like himself, though somewhat in the shadow of his grandmother. This safe, nostalgic place where he is always a ‘grandchild’ is in deep contrast to the fraught, physical and at times erotically-charged space of the acting school. His time at the school comes to an end and he moves out without any prospects, though finds his feet eventually. His grandparents age, as they must, and both die in quick succession. His time with them is at an end forever and he must go forth into the real world.

‘When Will it Finally Be…’, which was longlisted for the German Book Prize in 2013 and is the second book in the trilogy, explores Meyerhoff’s extraordinary childhood growing up in the grounds of the huge youth psychiatric hospital where his father was director. A peculiar and introverted child with synaesthetic tendencies and prone to outbursts of rage, he is plagued with doubts about his own sanity. He befriends a number of the patients, which soothes his feelings of being strange and in competition with his brother, but he can’t help feeling perturbed by his father’s erratic and distant behaviour, which ends up breaking up the family.

The first novel, ‘All the Dead Fly Up’, follows Meyerhoff on a gap year to 1980s America at the age of eighteen. Homesick, missing his new girlfriend and suffering from culture shock, Meyerhoff is an awkward and sensitive teenager trying to negotiate himself as well as the foreign country he finds himself in. He lives in Wyoming with kind host parents Stan and Hazel and their hostile son Don, makes the basketball team and falls for all-American girl Maureen. But three months into his year away his older brother is killed in a car crash and he has to return to Germany, finding his parents and other brother devastated. He goes back to America in an attempt to evade the trauma, but ultimately returns to come to terms with his brother’s death.

Meyerhoff compels the reader to relive their own feelings of wonder, alienation and self-discovery while growing up, as well as entertaining them with hilarious and traumatic anecdotes that are by turns comforting in their familiarity and delightful in their unusualness. Succeeding in making the most everyday occurrences seem miraculous, Meyerhoff can express a character’s entire personality in only a few choice words and his honesty with his readers is completely disarming.

Though an overlapping and comprehensive trilogy, each book is a remarkable self-contained work in itself. These beautifully written, interconnected coming-ofage novels are completely unique in their clarity and originality and have already been translated into a number of other languages. These books cannot help but make an impact on anyone who reads them – young or old – and each one perfectly encapsulates human vulnerability as well as the natural need to belong.

By Jen Calleja
Jen Calleja is a writer and literary translator. Her articles and reviews have been published by the TLS, Asymptote and Modern Poetry in Translation, and she has translated prose and poetry for Bloomsbury, PEN International and the Goethe-Institut. She edits the Anglo-German arts journal Verfreundungseffekt and is currently translating Nicotine by Gregor Hens for Fitzcarraldo Editions.

Joachim Meyerhoff was born in 1967 and has been a member of the Viennese Burgtheater Ensemble since 2005. He was invited to appear at the Theatertreffen 2009 with his six-part cycle Alle Toten fliegen hoch, which also formed the basis for his latest novel. In 2007 he was elected actor of the year. For his debut novel Alle Toten fliegen hoch: Amerika, he was awarded the Franz-Tumler Literature Prize 2011 and the Bremen Literature Prize Advancement Award.