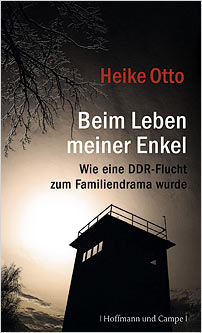 On My Grandchildren’s Life is an extraordinary account of personal tragedy under an authoritarian regime – made all the more effective by the conflicting versions of events given by the main protagonists. Their uncertainties become the reader’s uncertainties. Was a husband betrayed by his wife? She swears not; others insist he was. The mystery is only finally resolved by the reports on the police files.

On skis, disguised in white underwear, three men escape from East to West Germany in the winter of 1984. Their wives are to follow later; but under interrogation by the Stasi, Jürgen Resch’s wife confesses all. Receiving conflicting accounts of his wife’s willingness to live with him in West Germany, Jürgen successfully crosses the border again to confront her. But Stasi officers storm the house and Jürgen is arrested. After a prison term, divorce and attempted suicide, he meets a new partner, Andrea Otto, the sister of the author, and decides to stay in East Germany.

An exceptional story in itself, the juxtaposition of autobiographical narratives and historical documents allows the ‘perpetrators’ to speak alongside the victims, which in turn allows the reader to piece together the clues, as in the best detective novel.

Heike Otto was born in Saxony in 1968, and was a teacher before working for many years as a reporter and editor for SWR/ARD Radio in Stuttgart. Today she lives in Munich and works as a freelance journalist. The research for this book spanned several months, and involved collecting many original documents and examining the official Stasi files.

Hoffmann und Campe Verlag was founded in 1781 by Benjamin Gottlob Hoffmann and his son-in-law August Campe. The family firm was Heinrich Heine’s publisher. Despite changing hands several times during the first half of the twentieth century, the firm managed to retain its liberal traditions. Its international fiction list includes the complete works of Siegfried Lenz as well as books by Doris Lessing and V.S. Naipaul.